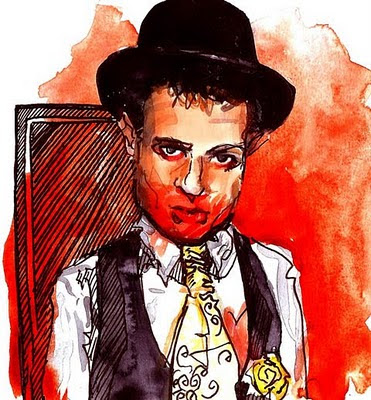 All that intensive live drawing I did must have been sharpening up my drawing muscles as I think this is my favourite Facebook Project drawing so far! - Dan as a Zombie Groom.
Posted by Jenny Robins at 5:58 PM 2 comments:

lots of reasons to be famous this week, featured on the ever brilliant Creaturemag, one of an awesome lineup of valentines artists being posted daily on Illustration Rally (make sure you check out the rest), also featured by the beautiful fashion blogger from Amsterdam Judith Anna yes that is a Panda Panda of Frida Where Are You?, commision on her banner design, one of my newest fav illustrators after spotting her portrait on Style Bubble in the same post as my hands.


after sketching my little heart out at the Amelia's Compendium of Fashion Illustration launch recently, my creations have been popping up all over along with lots of other amazing work by the other contributors. You can see my full run up here. I have condenced some of them for easy viewing:

from left: Alex Cox from Don't Panic, my favourite free magazine, he asked me if I like movies.
Carrie from wishwishwish - wasn't wearing a sailor suit, the drawing just came out that way
Danielle from Poppy Cleopatra, fashion writer into 'a bit of everything' (I approve)
Ellen Grace Jones from The Real Runway sporting her own beautiful handmade jewelery

Laura Snoad from Design Week (this is my favourite drawing - her colours called to me across the crowded tearoom and I nabbed her for my paints. That sounds a bit odd. ignore that) in gorgeous Tatty Devine Necklace and dress by Darling
Sabrina from The Sceince of Style requested a velociraptor in her drawing, I tried my best.
superstar stylist Tamara Cincik and her unborn child, in a selection of Flea Market treasures.
David Alphonso who teaches at Noisy Writing stood as still as a statue, I suggested a career in life modelling.

Amisha Ghadiali of elegance rebellion, only wears ethical fashion (very impressive) again in a sboutique necklace from her own collection - stunning.
Amy of Tantrum Magazine had awesome hair and lived up to the ethos of her publication.
Beth Davis of Oh Comely Magazine (you may remember I went to their launch that one time).
and lastly but actually my firstly drawing of the night Bettina Krohn from Make Lemonade, she had this stunning fake fur collar shaped stole from the online vintage boutique itself. aces.

I won't trouble you with too many of my photos as already stated there were many superior cameras in cleverer hands around, 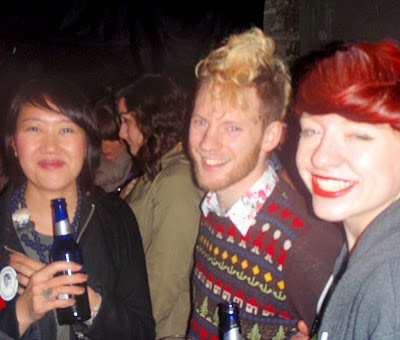 but here is Zarina (Cobaltcafe) Liew, Antonia (Makes) Parker and her boy in a spledid christmas jumper enjoying some of the evening festivity with carbon nuetral beer (!) 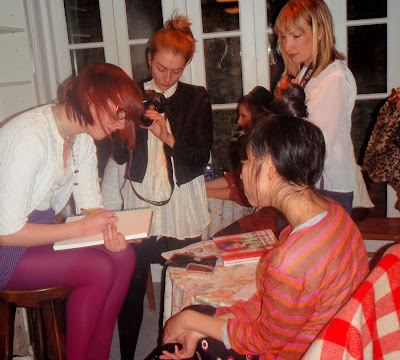 Here is Rachel de (precious little) Ste Croix drawing THE Suzie Bubble while being photographed by the great Sally Mumbly Croft and someone else who is probably also great in some way. 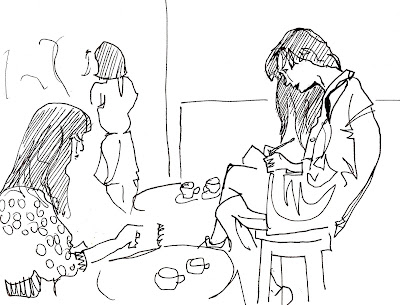 seated in the same actual chairs but from the other side, here is my sketch of Michelle Urvall Nyren and Naomi Law drawing each other. You can see the drawing Michelle was doing here, so it's all tripy and circular. and in here is the sketch Naomi did too, for like actual fractal postage. 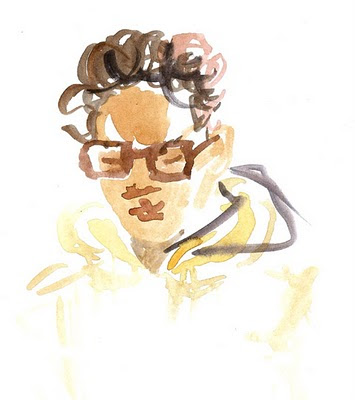 I also did this quick painting of photographer Liz with epic leggings (not pictured) who was so busy she ran off before I added the pen, but I like it without in fact, so here it is. 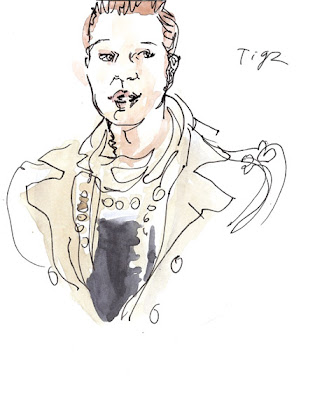 Tigz gets her own line, because. She is awesome. 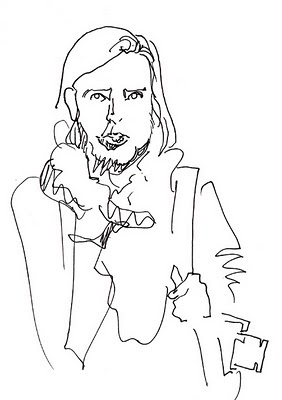 And finally this is Duck (of the epic Anastasia and Duck)(I'm sure he has an actual name too) because he was the opposite of Liz and just got the Pilot Hi-techpoint V7 treatment (no paints) as he said he had to leave. Although I'm pretty sure he was still there half an hour later.

Anyway it was a really ace night. bit trippy. but I'm going to stop blogging about it now. probably.

Posted by Jenny Robins at 9:34 PM No comments: 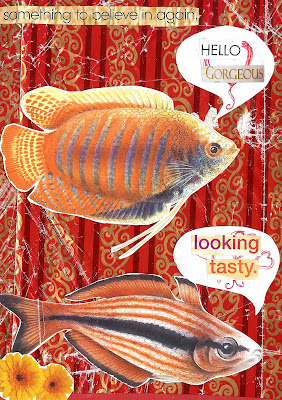 At this time of year I would usually be pimping my awesome handmade Alternative Valentines cards but I've got too much of that life stuff going on to make any this year (boooooooo)
If you are sensible though, you will get this mini zine I made of the best bits. You can use it as a valentines gift, or to cheer yourself up cos your a loser loner.
What did I learn at the Amelia's Compendium of Fasion Illustration launch?

if people with actual good cameras and photography nous/talent take photos of you, you come out looking much more hot. see below. 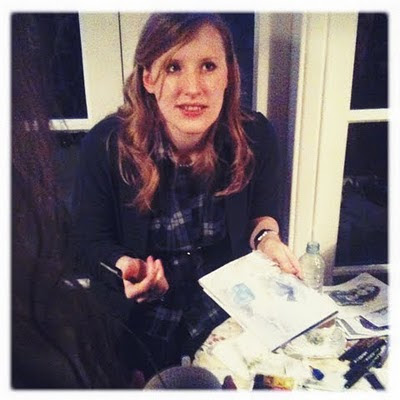 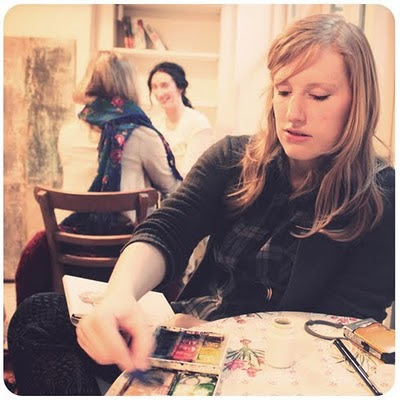 painty painty sketchy sketchy, the second photo is taken by Joana Faria (also a super awesome illustrator who I shared a table with in our sketchings) and i think the first one might be too but I'm not sure.

also, chunky knits in nuetral colours are still quite in. Sadly my paper white complection probably couldn't pull them off, even with a posh camera flash effect of not bleaching me whiter than white. I rock a slate pallete tho. obviously.

But enough about me, more about my drawings. Or, no, well, lets talk about the party first because I have to say it was super ace, or, amazeballs as I believe is the parlance. Of all the launch parties I have been to, and I have been to several, it was by far the best. Amelia and co really do know what they are doing with this stuff. I was cream crackered after the last week at my first PGCE placement (I had to mark a lot of sketchbooks - bless their little pencils!) but the adrenaline of doing my favouritest thing (well, you know, ONE of them) of drawing live things kept me on point till about midnight when this pumpkin caught the bus back home.

If I'd stayed a bit later I might have managed to meet more illustrators and fashion peeps which would have been even more balls of amazing, but as it was I was still joyous and enchanted to meet such geniuses as June Chanpoomidole (I love her self portrait in the book so much, she is still the network queen - i think she met everyone at the party), Zarina Liew (long legs ink wizard), Jo Cheung (birds and diamonds joy) (I met them already but it was still nice to see them) and Lesley Barnes (she is little and layers transparent things, I think I love her), Abby Wright (charming, I may have been rude to her, I forget), Natsuki Otani (you know she's a genius of colour, I want to be her when I grow up), Antonia Parker (epic hair, epic outfit, sparkleyest smile in tunny wells), Joana Faria (brilliant and beautiful, we are going to get drunk in Lisbon, maybe), Andrea Peterson (too talented to be allowed, and lovely, but i suppose she did fly a long way), Michelle Urvall Nyren (stunning, truly, i kept wanting to draw her instead of the fashionistas, and lovely brushwork), Naomi Law (I think we assembled bags together - awesome work, awesome girl), Gareth A Hopkins (taller than most of the other illustrators, due to being male, and comical), Rachel de Ste. Croix aka Precious Little. (lovely like her drawings), and also Erica Sharp (a total collage genius, sadly I only met her briefly)

I think I also met some of the other illustrators after I had had a few vodka O and ginger beers, but I wouldn't want to sweat in a court of law. Also I met Lu Flux (I was very excited) and lots of awesome fashion and arty people.

this just in, I'm not going to post any drawings now, I am going to wait till they have all been posted by the people I did them for or it's like they didn't get an exclusive. OK I might post a couple. 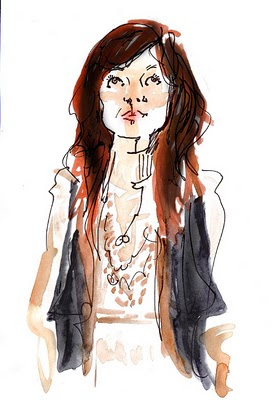 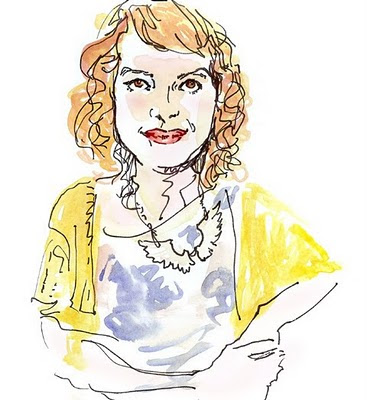 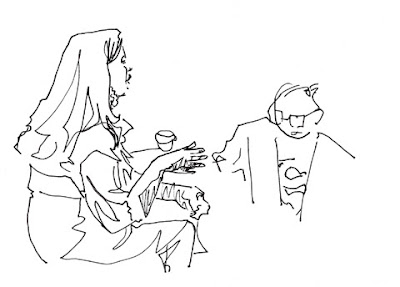 quick sketch of Amelia being interviewed by Alex Cox from Don't Panic (I drew him properly looking less round headed also - watch the space that is here.
Posted by Jenny Robins at 7:01 PM 2 comments: