You don't get to choose who you love.

I made this comic for the amazing Ztoical's visual campaign ahead of the Irish vote on marriage equality in May. 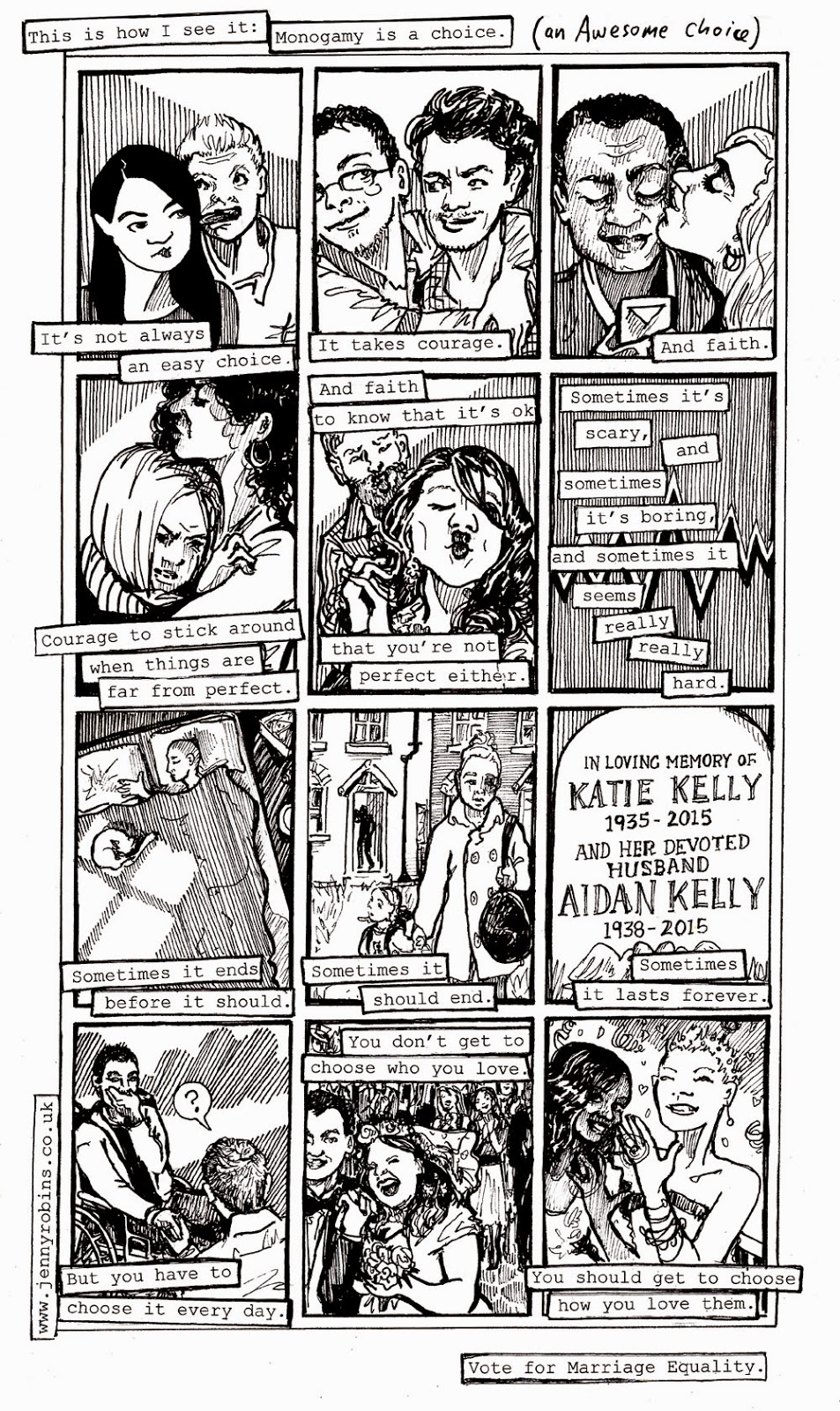 It was nice to have this impetus to make a comic about something I believe strongly.

And the other thing too, that monogamy is a choice. I've never believed in soul mates or love at first sight or any of that, and I think that's a big part of why I've managed to be one half of an excellent relationship that has lasted almost 14 years and one and a half of marriage so far. But the faith thing is true too. Monogamy is like dieting. You can only do it if you believe in the back of your head that you deserve the rewards and that they are worth it. Not faith in a fairytale ending, faith in a continuing adventure.

I wrote the words before I had thought of the visuals, and it's a little bit cheesy.

The hardest line to illustrate was the 'sometimes it should end' line, and I want to issue a disclaimer that I absolutely do not think that mothers are the only victims of domestic abuse, or that domestic abuse is the only valid reason for giving up on a marriage or relationship. There are lots of reasons relationships should end. It's ironic that in a piece where I'm actively aiming to show many sides to the story of love and subtly subvert clichés that having only one panel to show an idea can put one in danger of the opposite.

But I absolutely do believe in marriage equality, and if you are in a position to vote for or support it, I wholeheartedly urge you to do so.

And to follow the tumblr campaign this kicked off here.

Posted by Jenny Robins at 10:58 AM No comments:

YES I am officially launching my revamped and moved website. 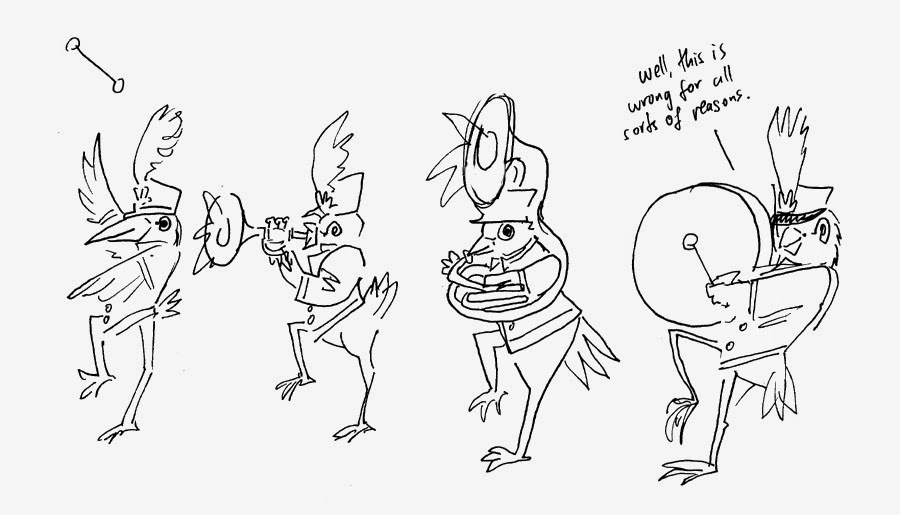 (Literally: Ooooh I should draw a quick sketch of a bird parade here that would be fun! But the physiology of birds marching and playing brass instruments is just fundamentally inaccurate. Which I cannot refrain from pointing out. That would be irresponsible.)

Not the most flashy upgrade in the world, but it does have a lot of my work on it, organised into nice posts and pages where you can see it nice and clearly. 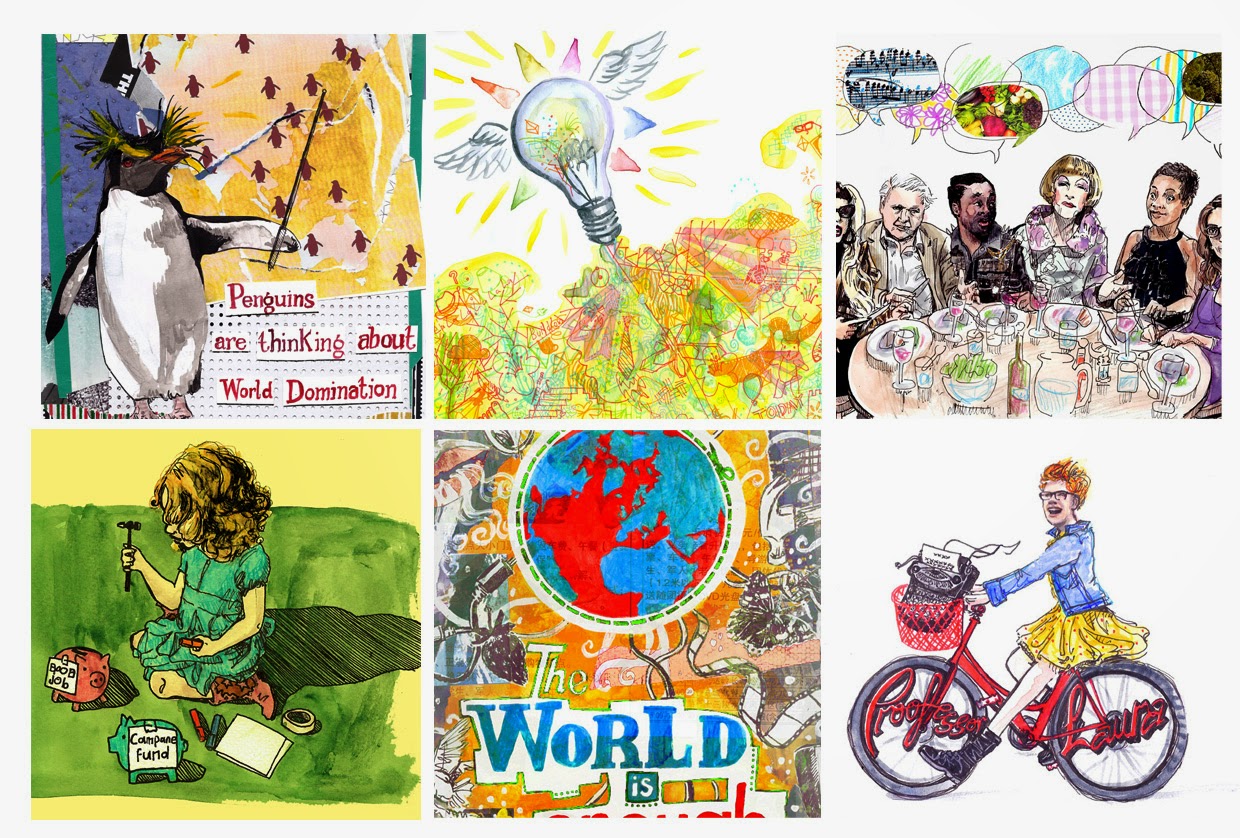 It has, like, an about section, and a press section, and 6 separate portfolios of my work plus a bonus sketchbook section. AND different banner designs and a feed of this blog, so you can go back and forth between the two all day if you like.

Coincidentally, I noticed that this very blog has almost reached the exciting milestone of 25,000 views! Sadly there doesn't seem to be a way for me to see who exactly my 25,000th viewer will be/has been or I could give them a prize. So instead I will have another competition to help you lovely people celebrate these two lovely milestones with me, and to give you the exciting opportunity to share them with your friends.

WHAT CAN I WIN?

To keep this simples, I'm offering 2 people a straight up commission of my drawing time up to 3 hours. I will draw something of your choice for you, and post you the original and the digital versions. This can be a portrait of you or of someone or something dear to you, or something a bit more inventive like a scene you'd like to see, a dream you had or a celebrity in a compromising position. The winners will also get a selection of my promotional bumf including stickers and zines.

I may send out some runners up envelopes of bumf if I get a large response to this. 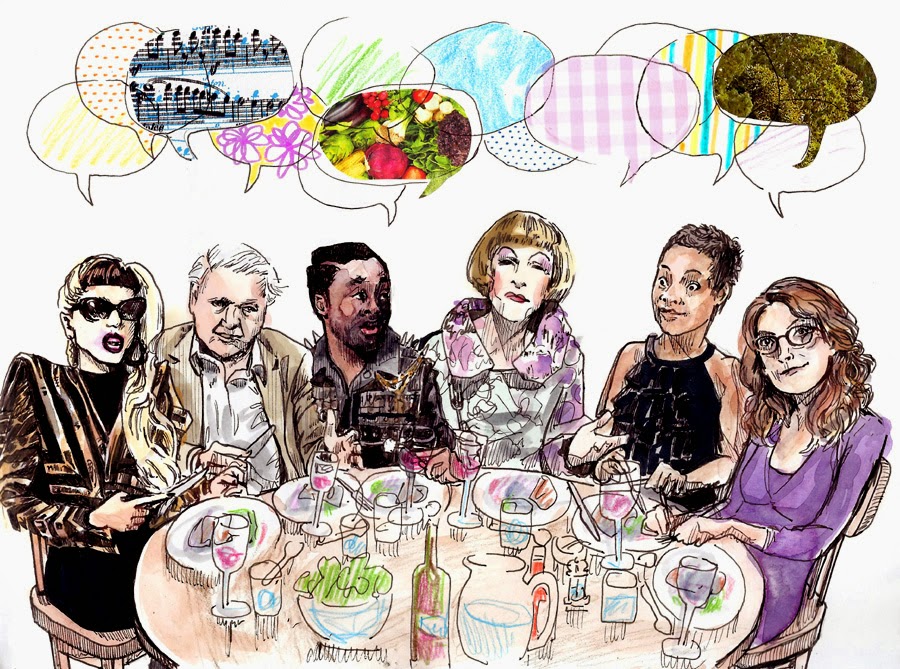 (These celebrities are all talking about this epic competition.)

HOW CAN I WIN?

One winner will be the thing that I most want to draw.
The second will be chosen using a random number generator.

2. Add a comment to this post, or send me an email at jennyrobins[at]gmail.com saying what you would like me to draw for you if you win.

3. Share this blog post on as many platforms as you like using the #jennyrobinsillustration - the more times you share the more likely you are to win, although if you have high privacy settings on facebook please note I may not see your shares so let me know you have sent them.

This competition will run until the 1st of March.

And don't forget to visit my improved and new site of web. 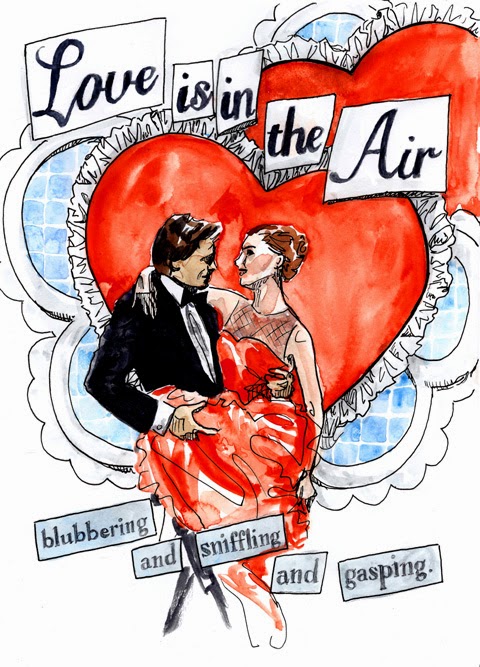 It's almost Valentimes ladies and gentlemen (and anyone who does not identify as a lady or gentleman), I did this reworking of a collage card but with bonus classical romance shtick piece above. There is also a really cool (if somewhat cheesy) love themed comic that I made that I'm not allowed to show you yet, but hopefully will be able to give you all that as a Valentines gift.

Do NOT be forgetting to head along to my Etsy Shop if you are interested in one of the alternative Valentines cards or Love Zines for one of your loved ones, or to encourage your loved ones to buy them for you. 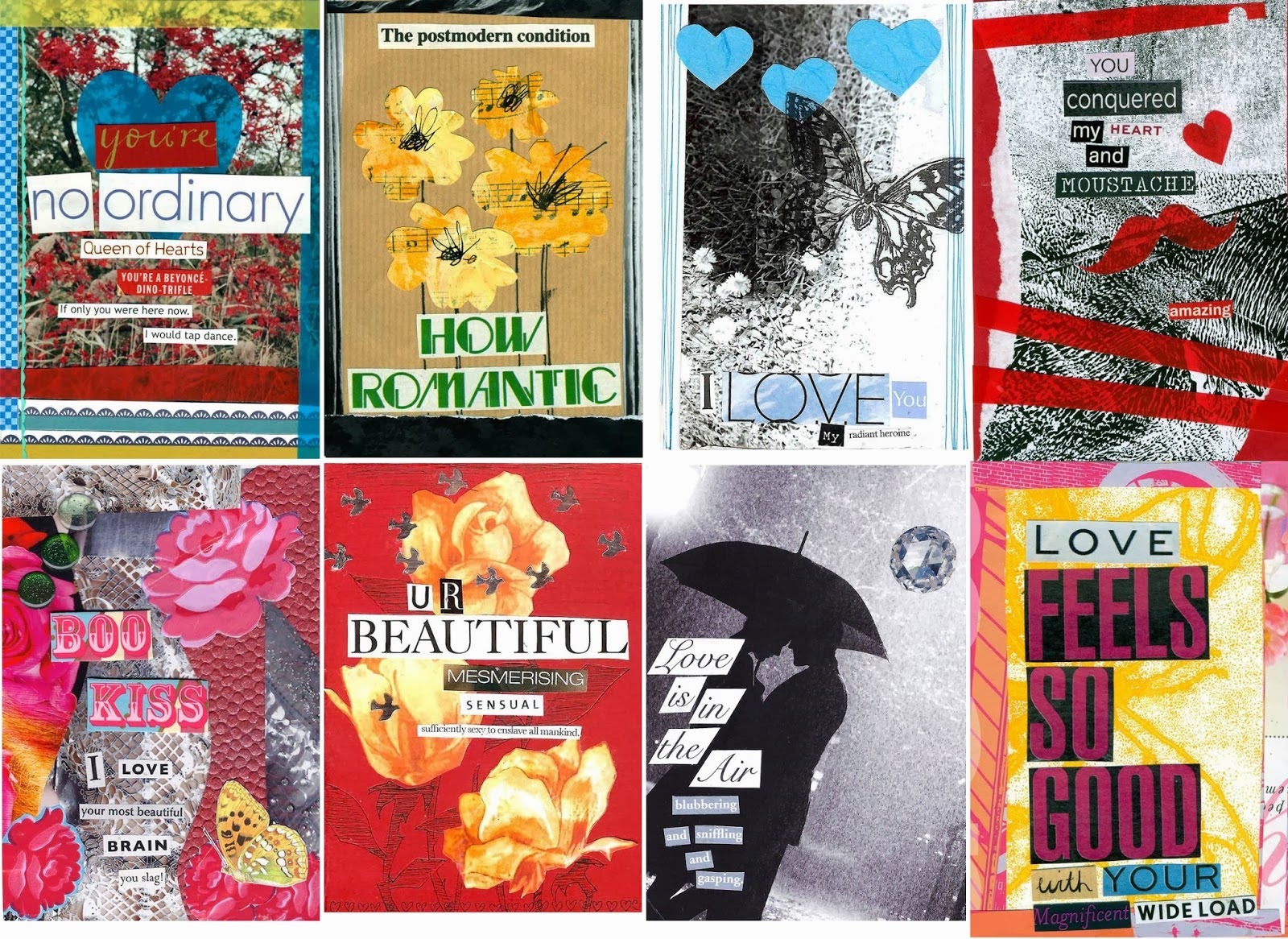 If you are not in a state of loved bliss per say, or that is to say, a singleton by chance or design. I am sharing this story for you which I stole from Invisibilia. I don't believe in it at all, the idea of soul mates that is, or this particular creation story. But I enjoyed it anyway. 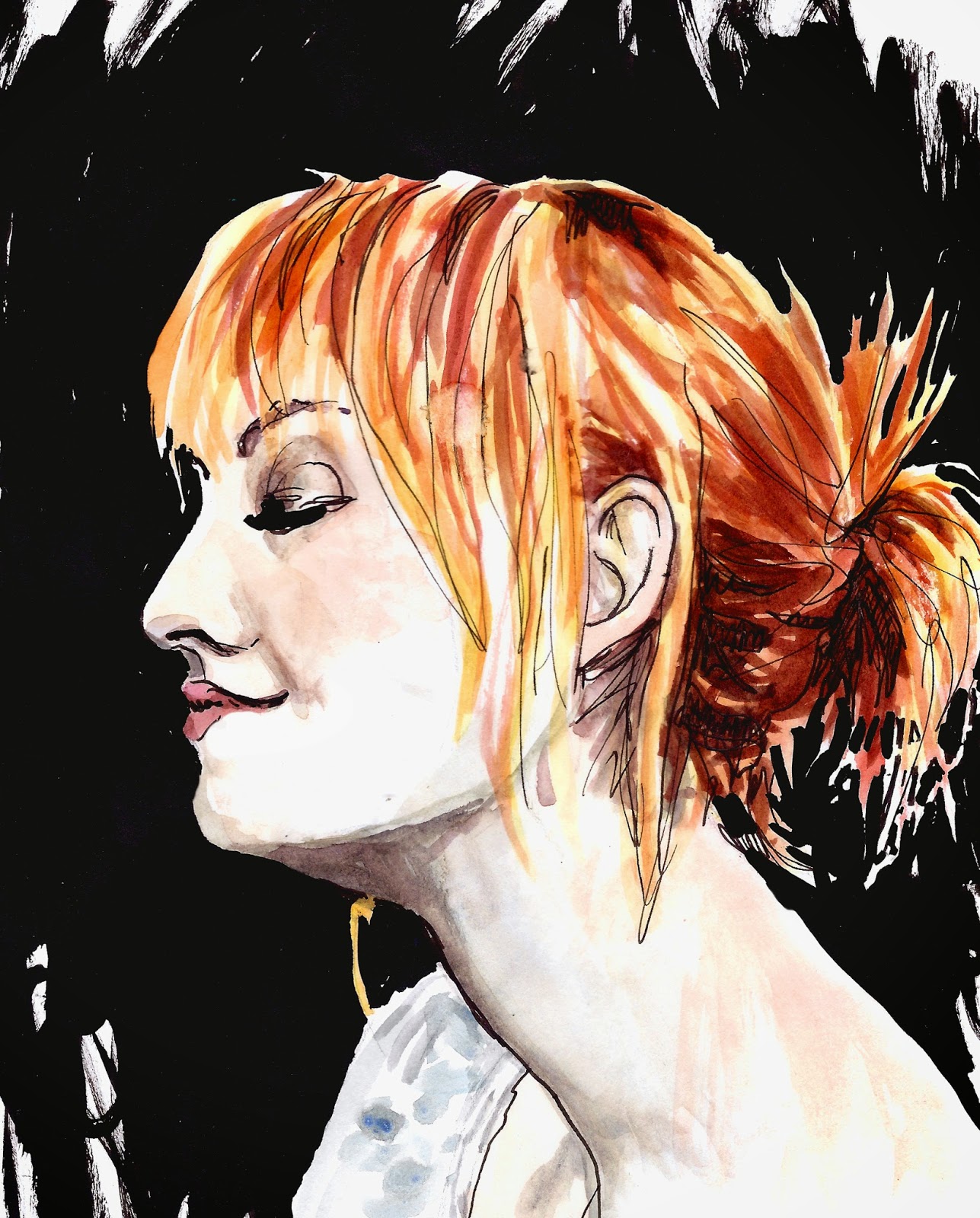 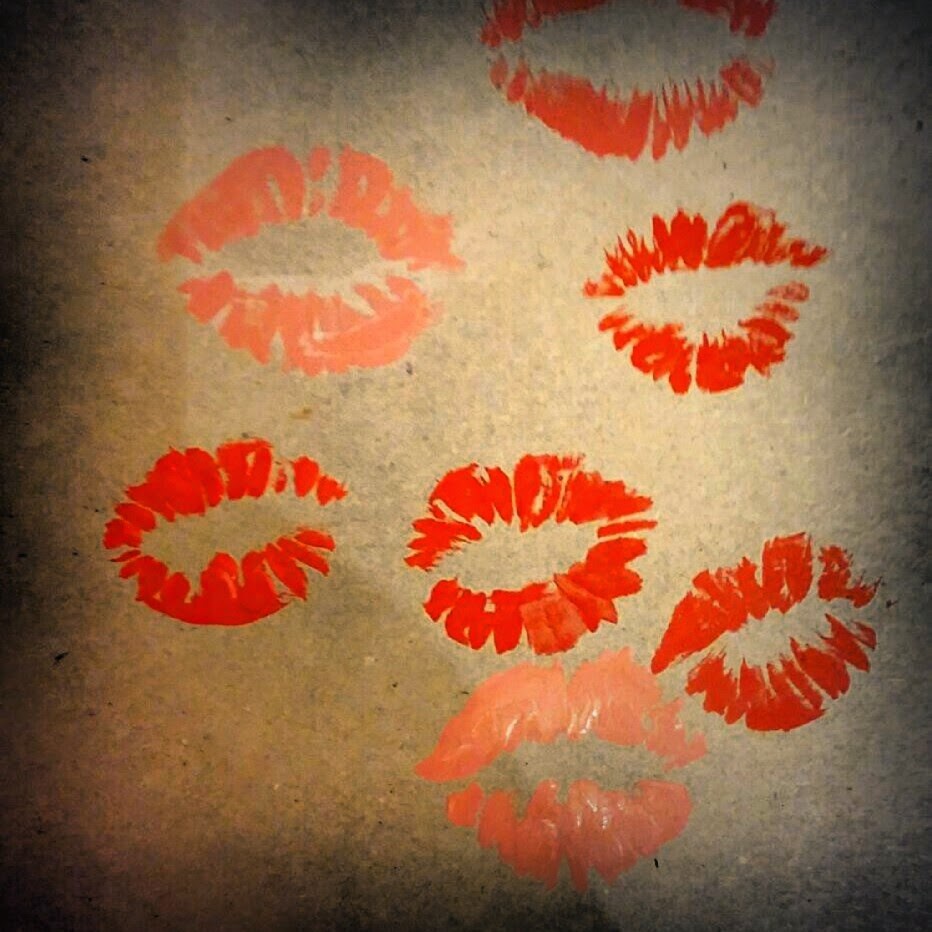 Posted by Jenny Robins at 4:58 PM No comments: