In factuality I tend to think of years in the academic sense (September to August), so I am always confusing people with my use of last years and next years. THIS year though, I definitely did some things that are worth recalling in blog form I'm sure, even if I have to triple check the dates to make sure of what actually happened in the year of two thousand and fourteen.

It's been a busy year and a number of those things I didn't even get around to blogging, so there should be some surprises too. I shall be vaguely chronological.

A quick look at my calendar tells me that in January of 2014 I went to see the Light Princess, the brilliant alternative fairytale musical by Tori Amos

I also went to Budapest. That was also awesome. 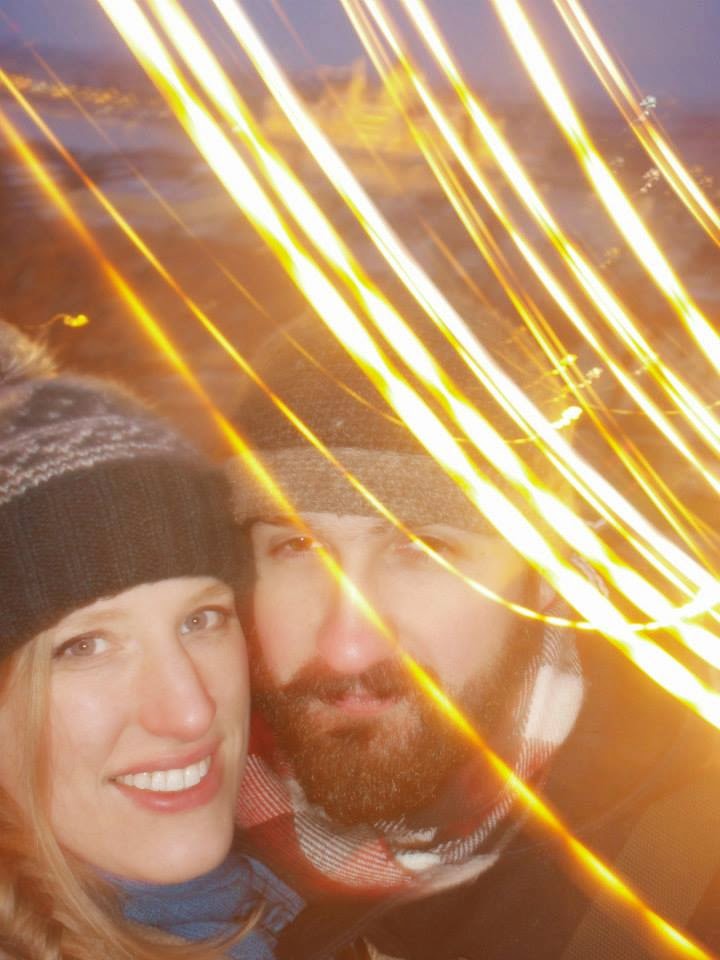 Alex had a beard at the time.

I also ran a little valentines competition to help choose which of my long running series of collage cards got printed, culminating in 8 favourites becoming commercially available
(and I'm sure I'll be shoving them down your throats again in no time as I still have some of the stock left you lucky lucky people). 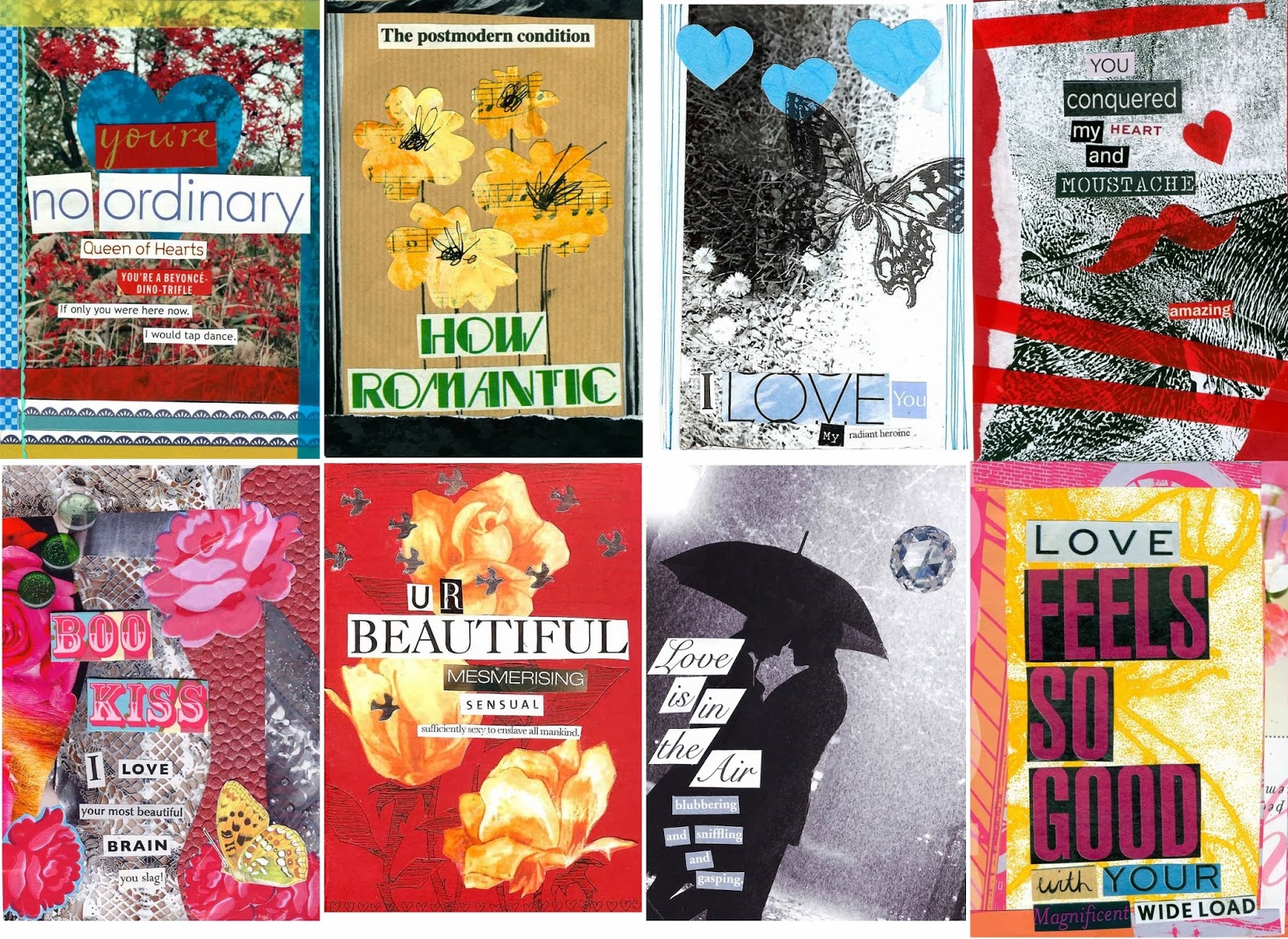 In February, I made my first visit to Jumble and Pearls, who I revisited twice over the course of the year, it's such a lovely bunch of creatives to work with I can't actually believe it's been less than a year, and hope to do more events with Rosalia and co this year coming. 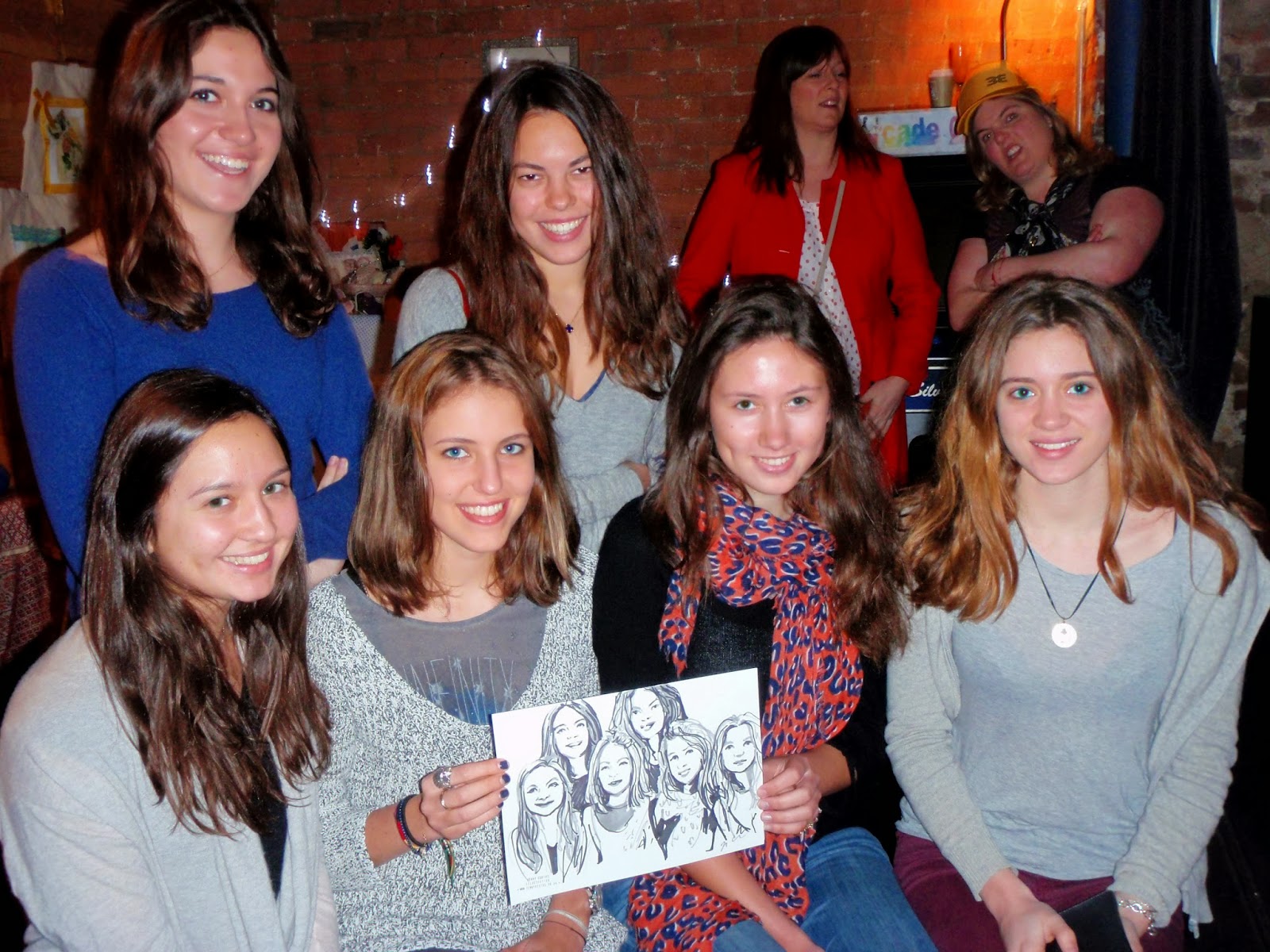 Also in February I saw the estimable Sir Quentin Blake talk about drawing beyond the page and wrote about it for Amelia. The best part of this story which I'm not sure if I mentioned at the time, is that the legendary illustrator himself actually sent an email to thank me for the post - that's pretty amazingly cool right? He said I was a good listener. 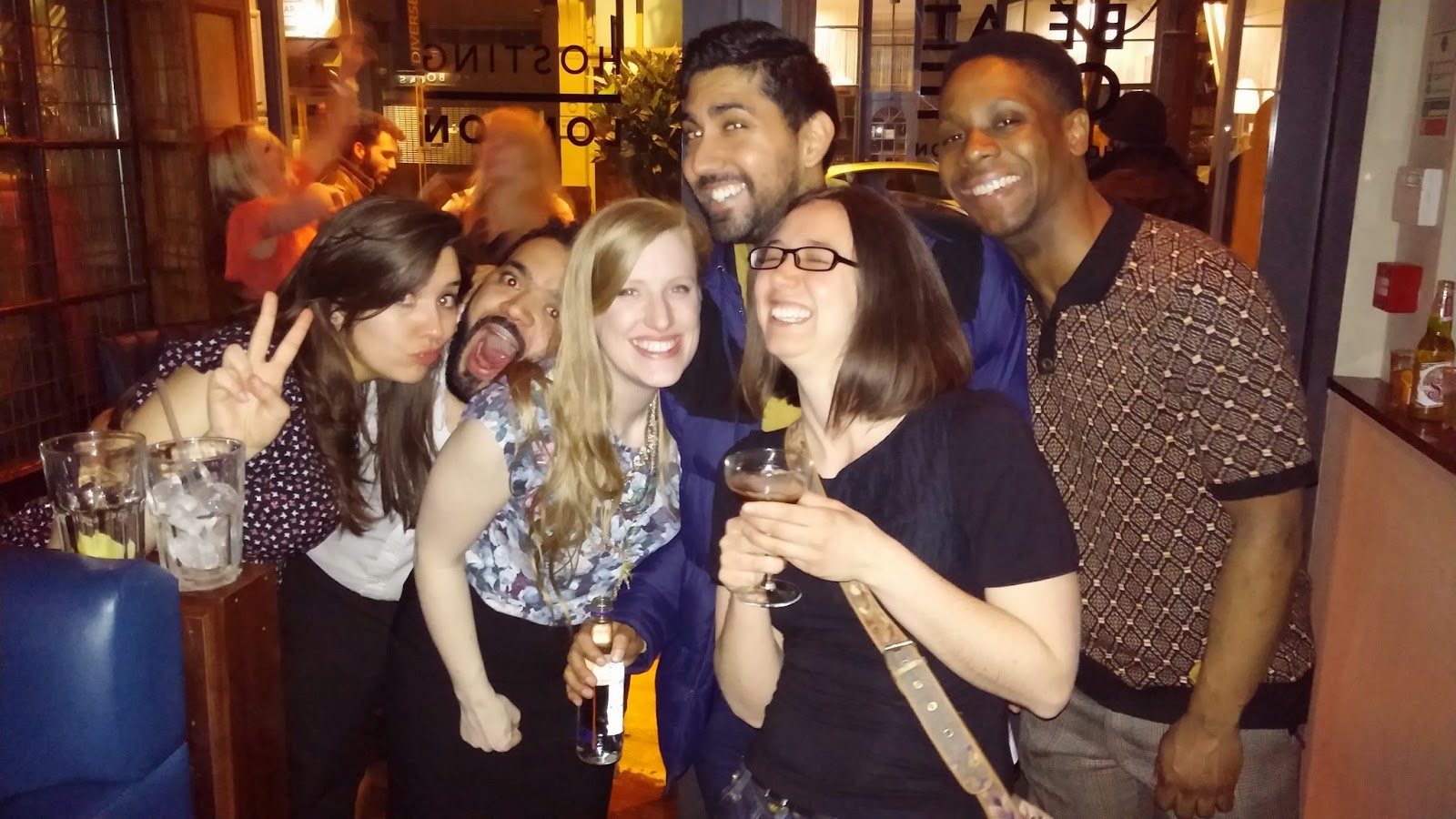 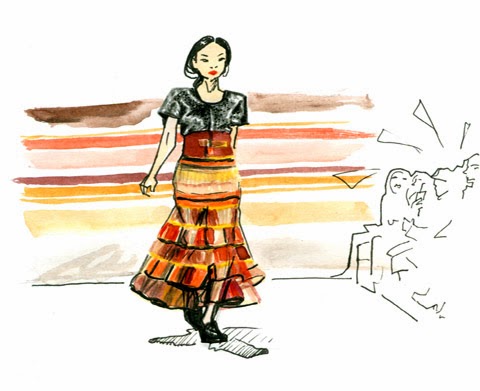 According to my calender I was reading Bourdieu at the time, or at least, I needed to return some to the library.

In April I went to the MALDIVES. 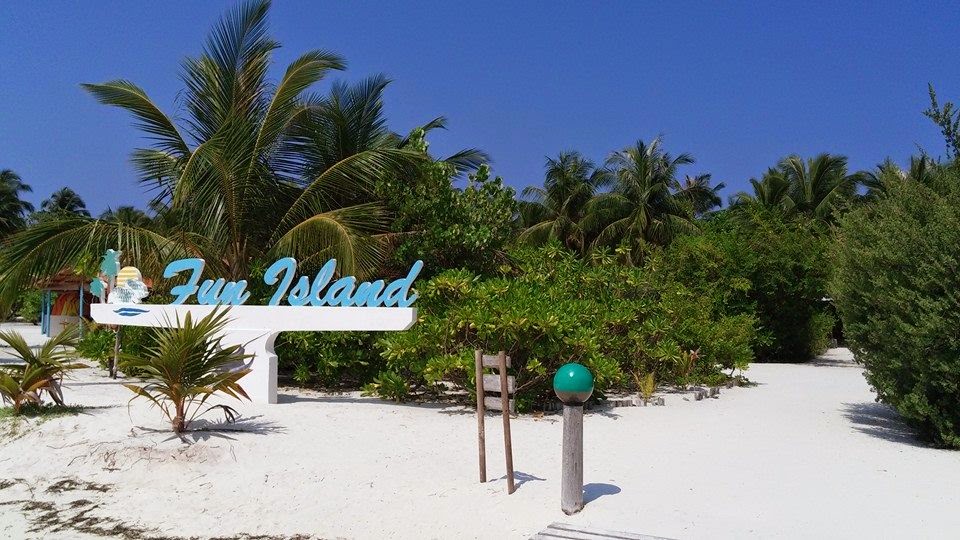 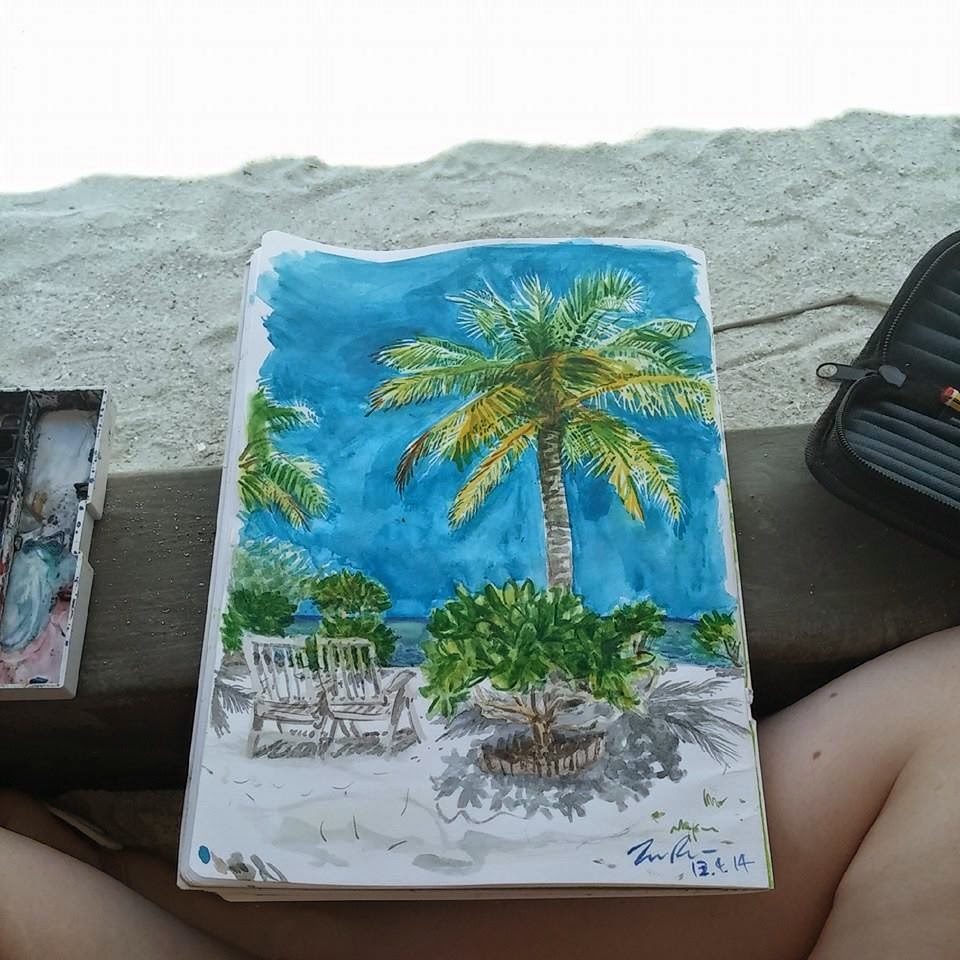 For mine and Alex's official honeymoon. It was pretty ****ing idyllic.

As soon as we got back I was full tilt into preparing the first of two events organised by StoryHands this year - our workshop at Tate Modern with Tate Collective, which took place on the 3rd of May.

Myself, June Sees and Antonia Parker (fellow StoryHands veterans, I've known both these amazing ladies since the early days of my London illumastrating) organised a tour of the Matisse Cut Outs exhibition for groups of young people, then got them creating with a series of activities based on the themes of the show. For me this was as much about a fluidity of process as it was about colours and shapes, Matisse's work in his later life shows such sensitivity to the power of simple composition and imaginative serendipity. It was also a fabulous opportunity of course to work with such a prestigious organisation and with such exciting artwork. The vibrant and varied work our young collaborators came up with was fantastic and I think we were pretty successful in evoking the spirit of Matisse's Vence Studio. You can read a lot more about the event in my write up for the StoryHands blog here. 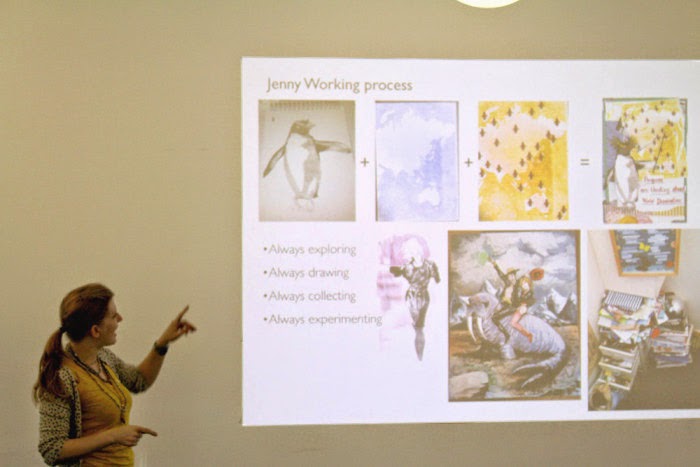 Here's me, pontificating on my own productive processes. And here's just a small selection of some of the work that got made on the tables, walls and windows of the inspirational room Tate provided us with for the workshop.

I always have to make something with a bird.
(no really, ask my students. ALWAYS.)
So I made this bird, seen here with the Globe and the Walkie Talkie. 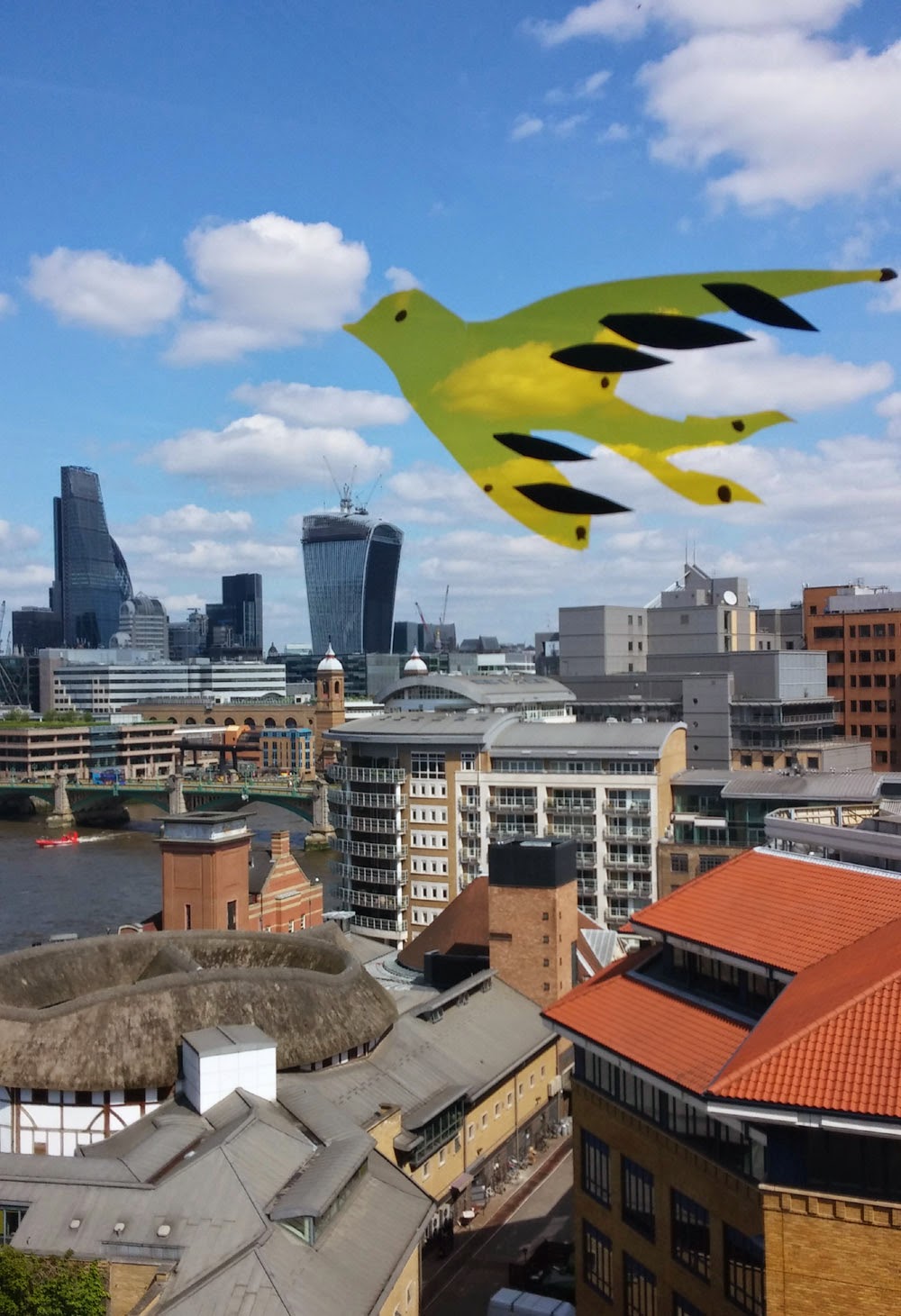 In May I did live drawing at a burlesque and variety night in Hoxton, and completed work on Katie and Elliot's wedding stationary, both of which I have blogged at a decent length recently, so I won't elaborate, except to say that both were very satisfying and fun commissions. 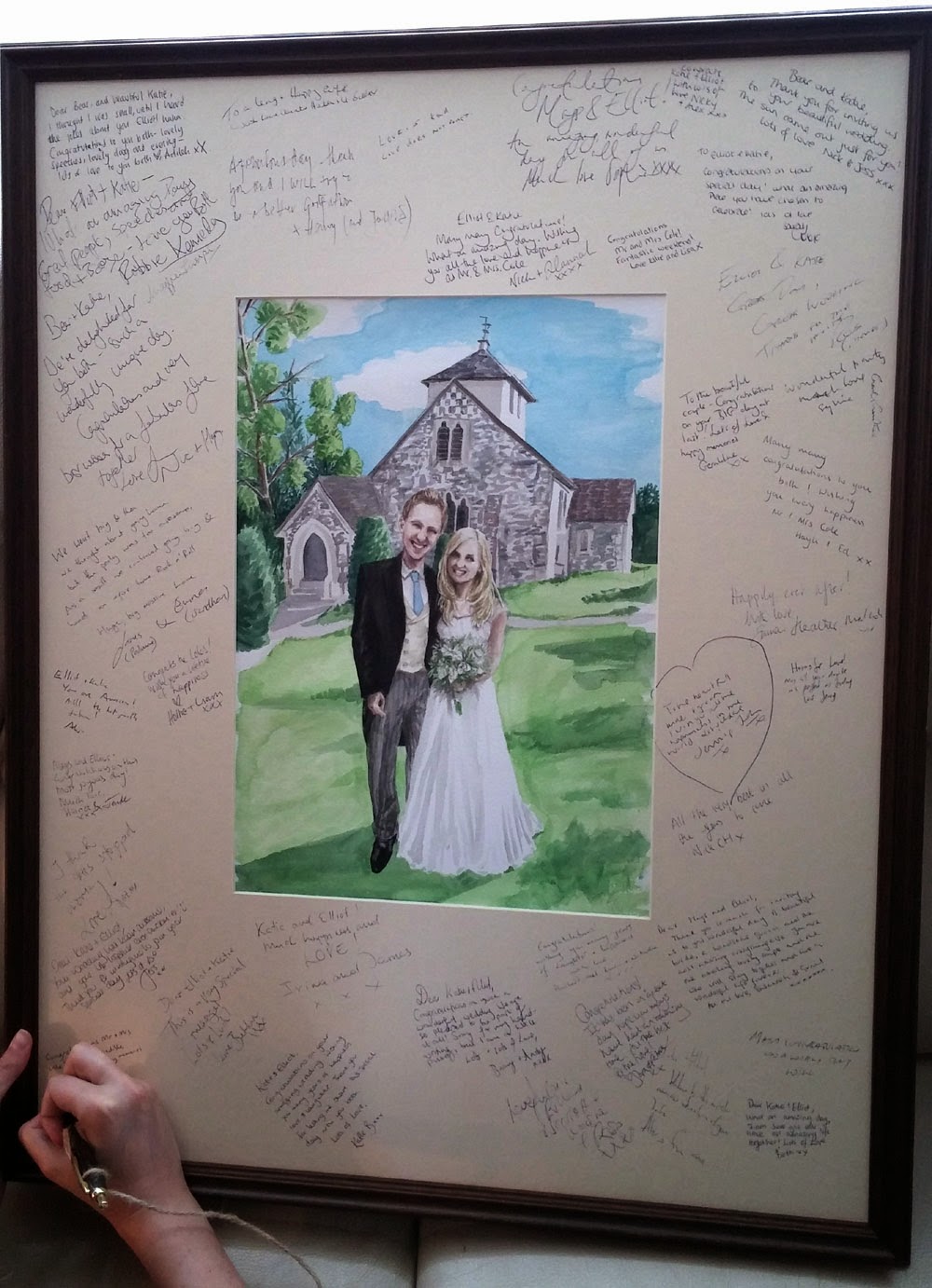 One thing I don't think I did mention here was this other cool thing I did for the lovely couple's big day - a watercolour portrait in front of the church used as a guest book at the reception. I needed to put this together from a number of fittings and hair rehearsal photos in the week before the wedding, so it was all a little manic and last minute. But it came together nicely, and happily the weather on the day matched the sunshine I painted!

A lot of the summer was taken up with thesis writing as I came to the end of my MA in Art and Design Education, but I did manage to fit in a few weddings, some portraits, visits to shows and exhibitions including a late night viewing of the Royal Academy Summer Exhibition at which I drew this sketch of  Gabby Young and her band performing amongst the artworks. 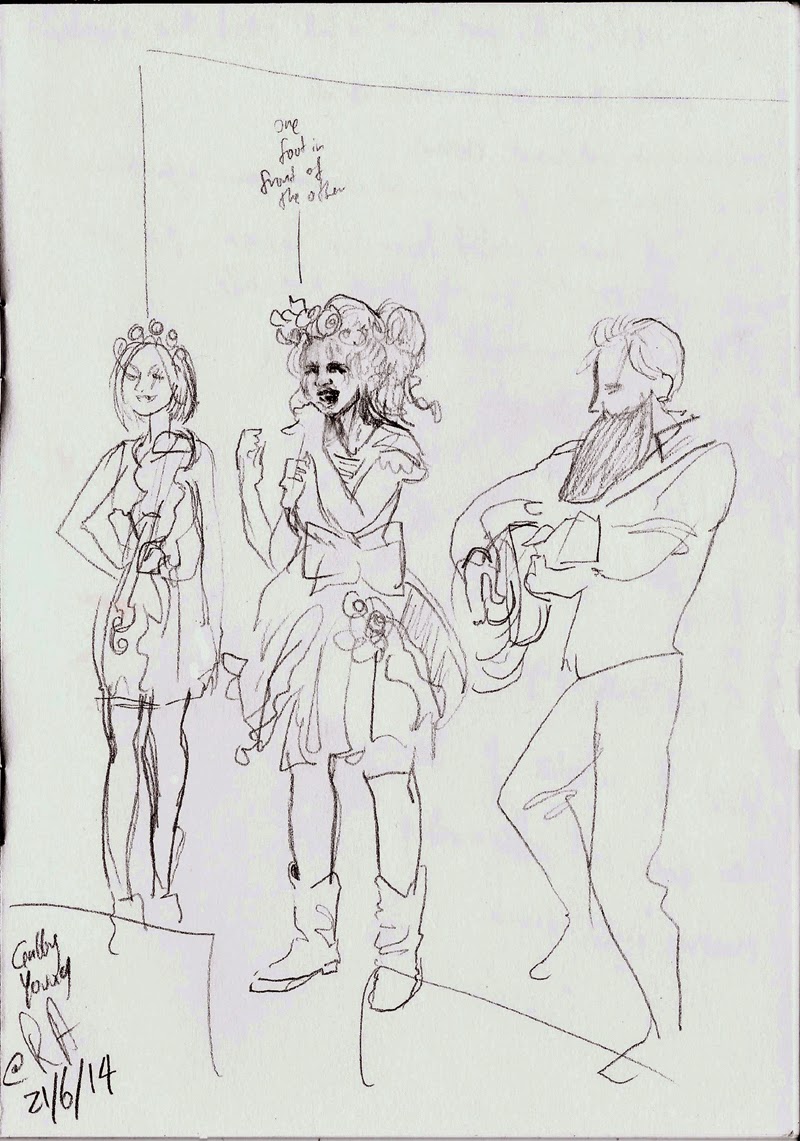 At the same event, my sister Hazel and I experienced our first silent disco. Which was excellent.

In August, and sensibly just before my thesis deadline, I went to the Green Man Festival in Whales. We slept in a really cold tent and ate a vast variety of world cuisines out of disposable containers and saw bands and stuff. I took quite a lot of mirror sunglasses selfies. 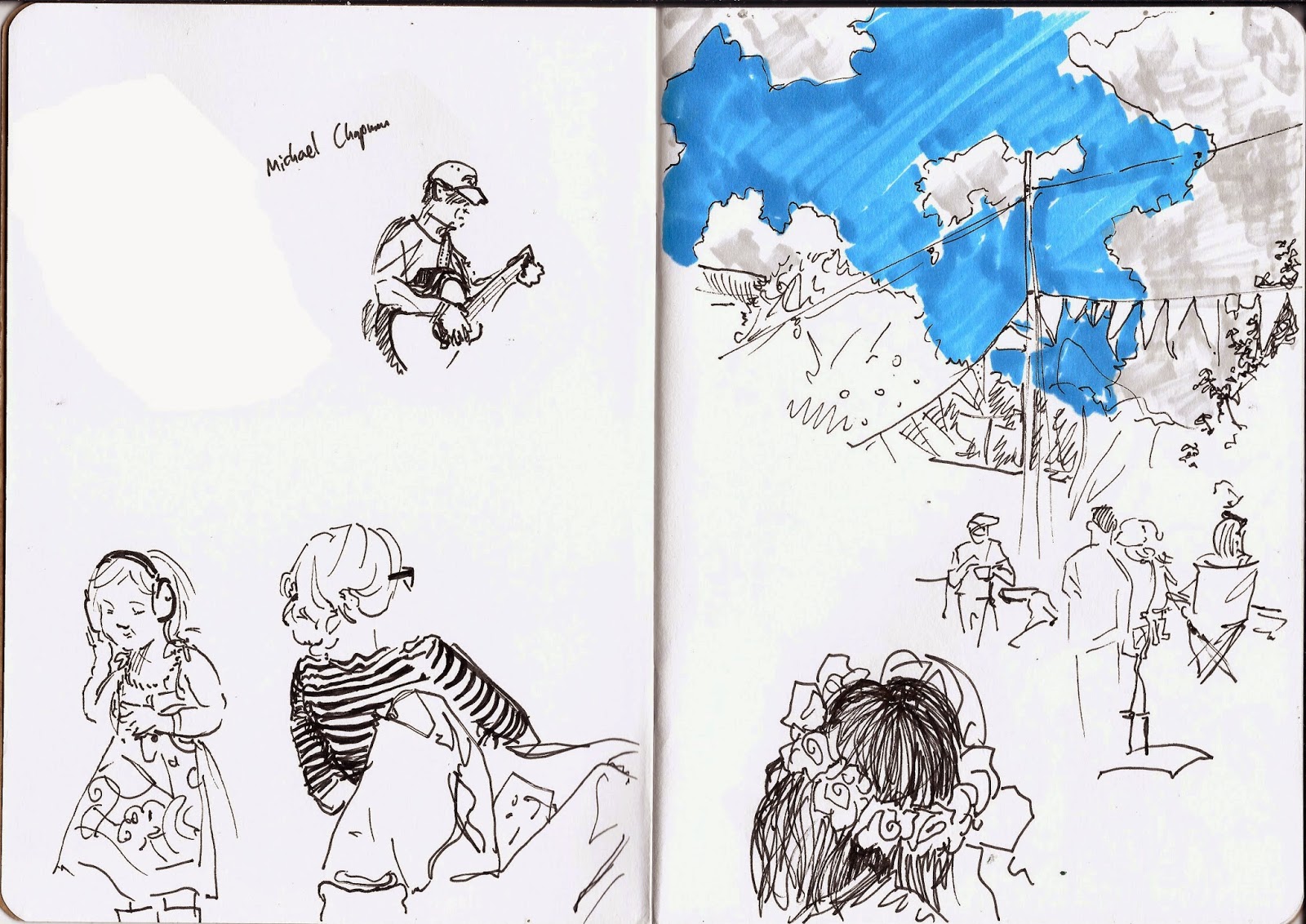 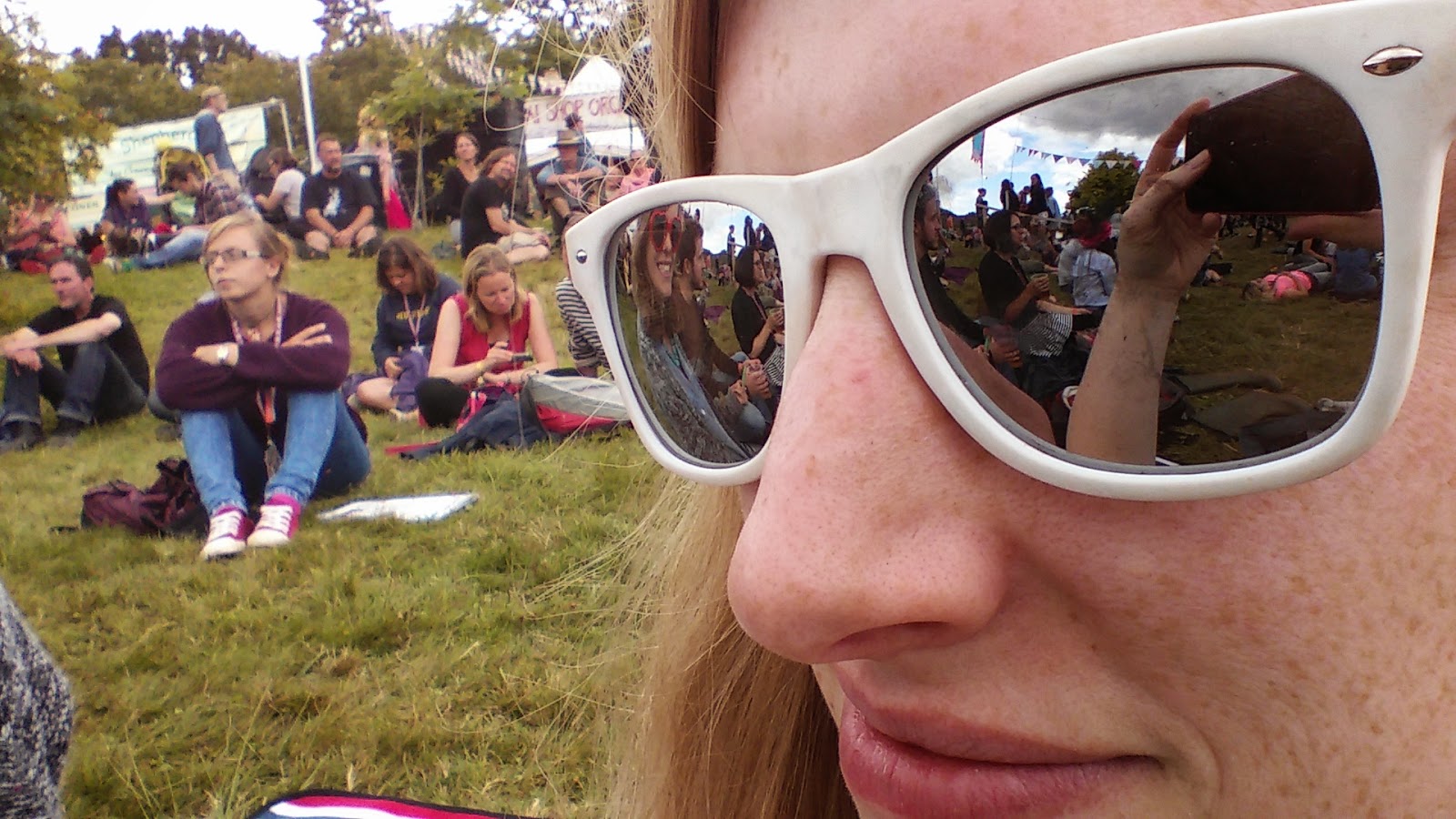 In September I started a new part time art teaching job working in North West London which is going well.

In October and November StoryHands hosted our second great event of the year - a sketchbook scavenger hunt in the City of London as part of the Big Draw festival.

June and I led groups on a little walk from the Monument to the Great Fire of London to Postman's Park, with stops in between taking in some hidden gems of the city and challenging our guests to discover and draw there. I've already done three write ups of the event and I'm getting a bit repetative, but if you're interested you can read ALL about it here on the StoryHands site, and see LOTS (and I do mean lots) of pictures. If you do follow me on some of the social medias, you've probably heard all about it already. 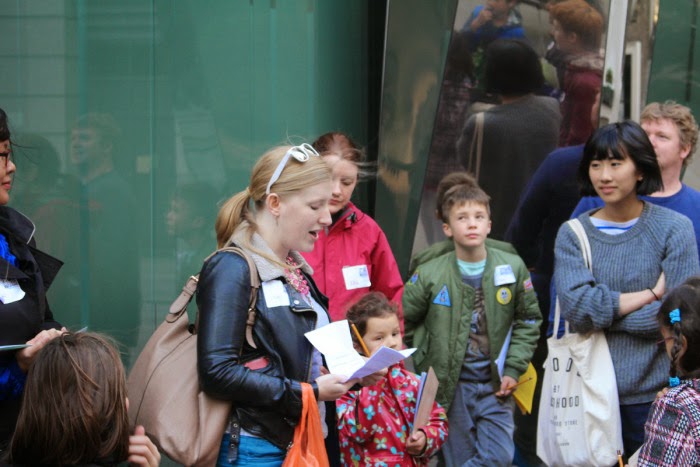 Here we are beginning the first walk with some spiel on looking and on appreciating our great capital.

I had a lot of fun doing these walks and it was so great to see our planning and preperation pay off in all the brilliant drawings made by participants of all ages. Although the decision to have two walks on each day - one family friendly one in the afternoon and one adults only with added pub crawl in the evening meant those two Saturdays were certainly long and exhausting for us, I think it was a good decision to do both as it really gave us the opportunity to meet and work with a great mix of people, including old friends and illustrators, but also new friends from lots of backgrounds and professions. We didn't change the tasks or the approach much in each walk and, while there were a lot of individual approaches, everyone embraced the challenges and made great drawings.

After the success of our first Saturday of drawing, we attracted the attention of the director of the Campaign for Drawing, Sue Grayson Ford, who came to our second family walk to join in with our activities - what an honour! I've also been invited to write a piece on the experience for AN Magazine, so I think that we can safely call this event even more successful than the first.

Also in October  I attended a conference on drawing at the British Museum, dressed as a bat for Halloween and took a sneaky trip to the Red Sea. In November I took a large number of children on a trip to the Natural History and Pitt Rivers Museums in Oxford. I could actually spend a week in that building (a cathedral to science, FYI) looking at all the things, it's so good, you should definitely go there if you have the chance. 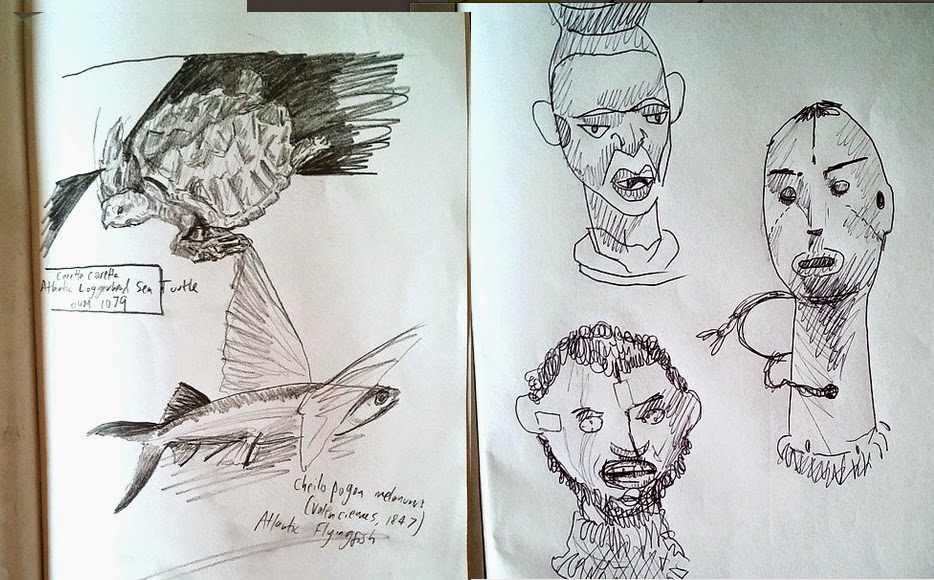 The Natural History museum is full of amazing animals and natural forms, while the Pitt Rivers is full of astonishing cultural artefacts.

In the last few months I have been working on revamping my website, which is ALMOST FINISHED. Honest. That will be the next thing. Also I have completed a four page comic based on a collaged found text story which is in the new issue of Meanwhile... from Soaring Penguin Press. I don't think I'm allowed to publish it all here but here are some sneaky pics.
Clicky the links if you would like to buy a copy. 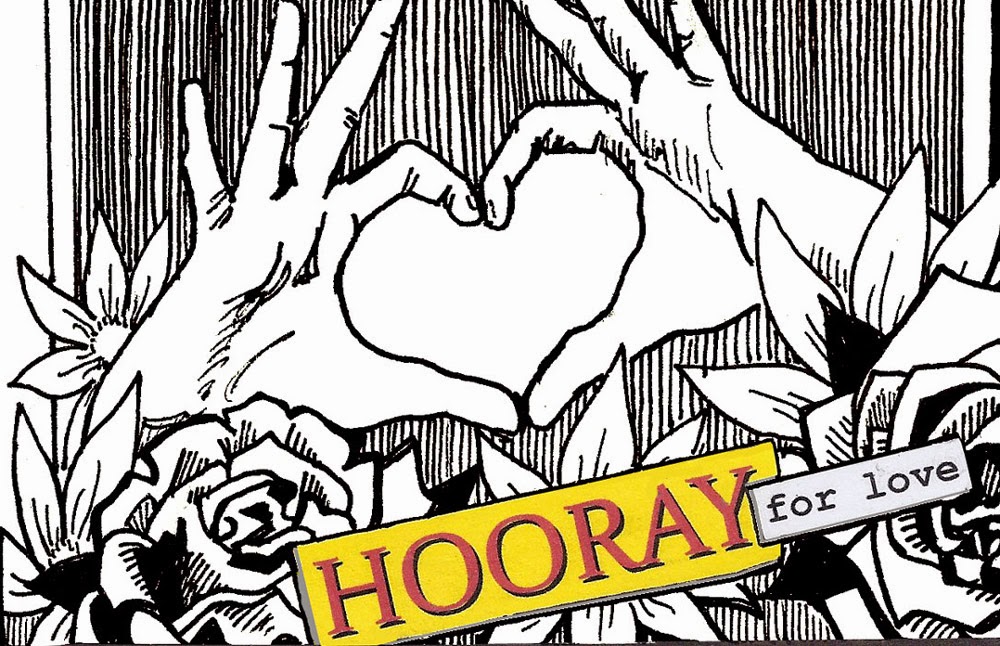 It's a fancy dress love story. With zombies.

Also in the last few months I was working on an epic musical collage project creating lyrics pages and design work for The New Tabloids new album Good News. This was a bit of a departure for me because the work was almost totally abstract rather than figurative, but a lot of fun because for each song I was able to work on communicating the themes and feel of the music through the use of different colours and collage materials. Again at this point I can only show you a sneaky peek, but keep an eye out for the imminent release of the entire album, I'm sure I'll be bigging it up on the media of social. 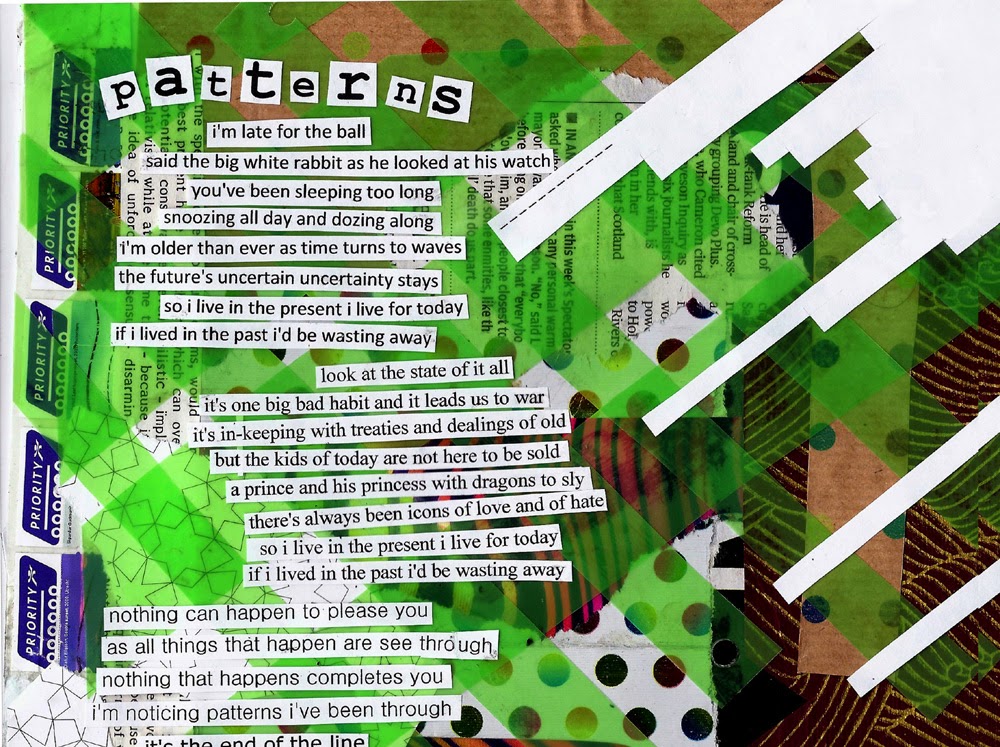 To conclude the triumvarate of recent projects combining text collage and imagery, I also did this poem about the enduring mythical image of the witch in popular imagination for Amelia Gregory's new book That Which We Do Not Understand. This is a fabtasticly beautiful publication with luscious gold foil printing and lots of exciting artwork, so I definitely recommend getting your hands on a copy. If that is still possible, of which I am not sure. 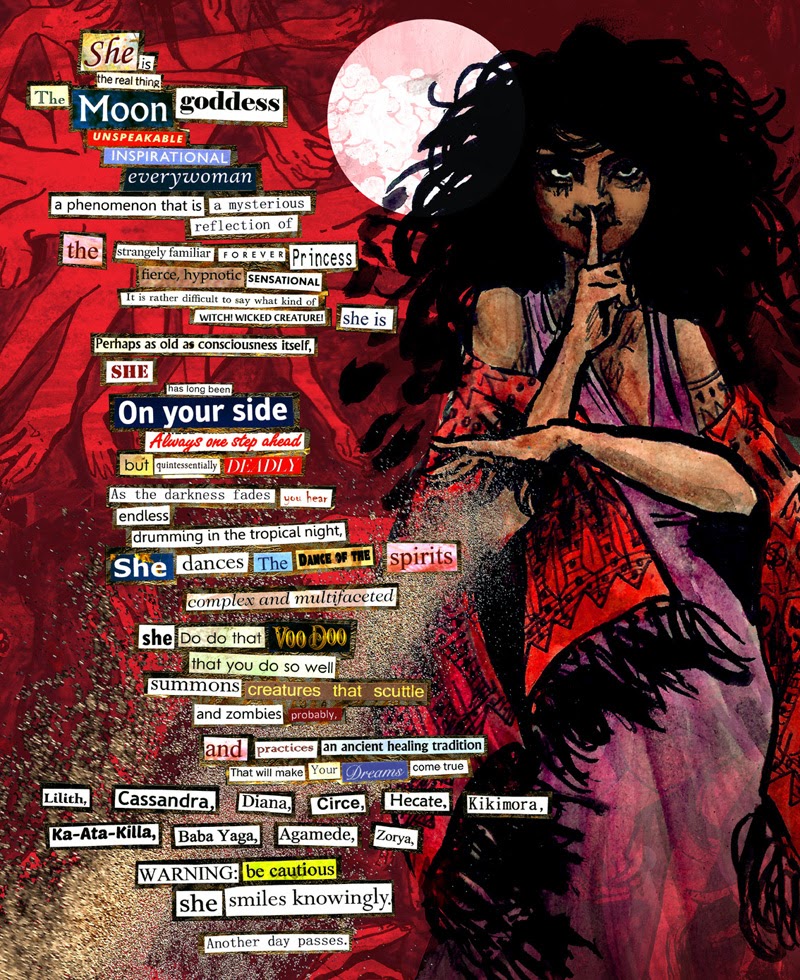 Well that was quite a lot of stuff, but then I guess a year is quite a long time really.

Here's a few of the many sketchbook scavenger hunt pictures to finish off my yearly round up. 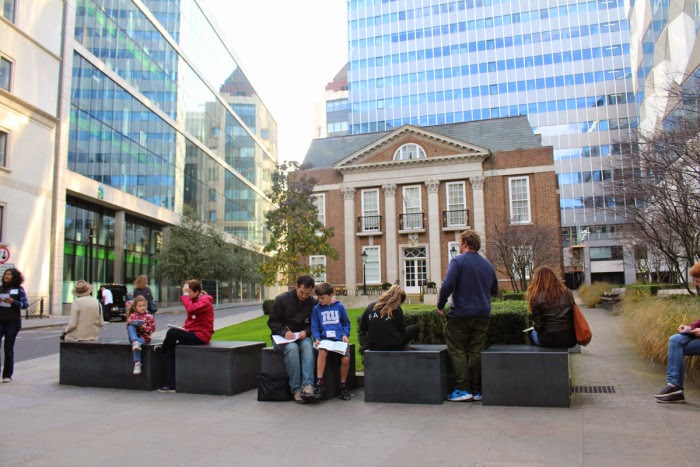 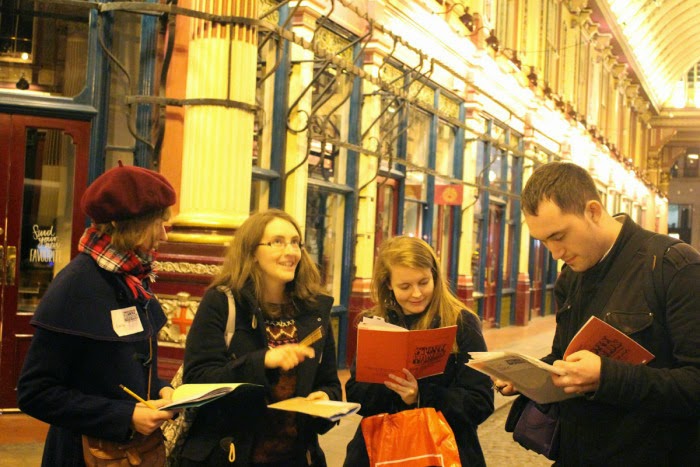 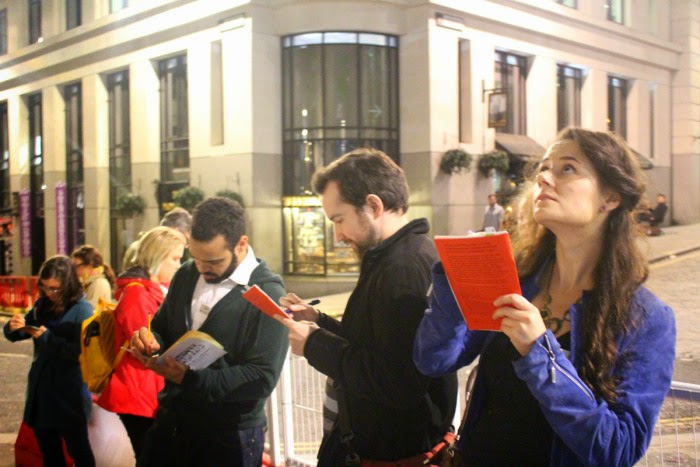 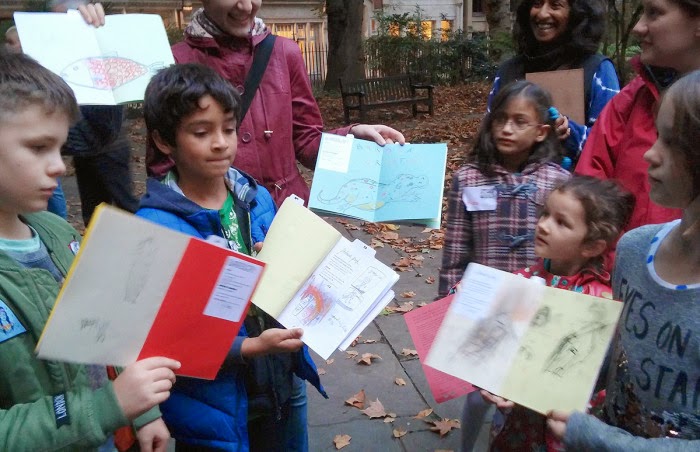 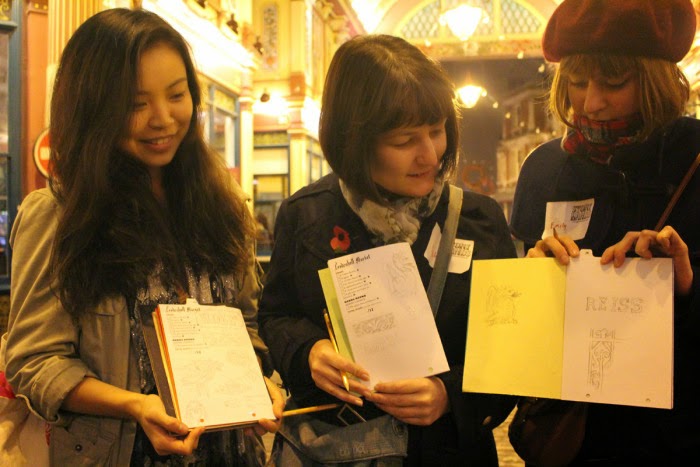 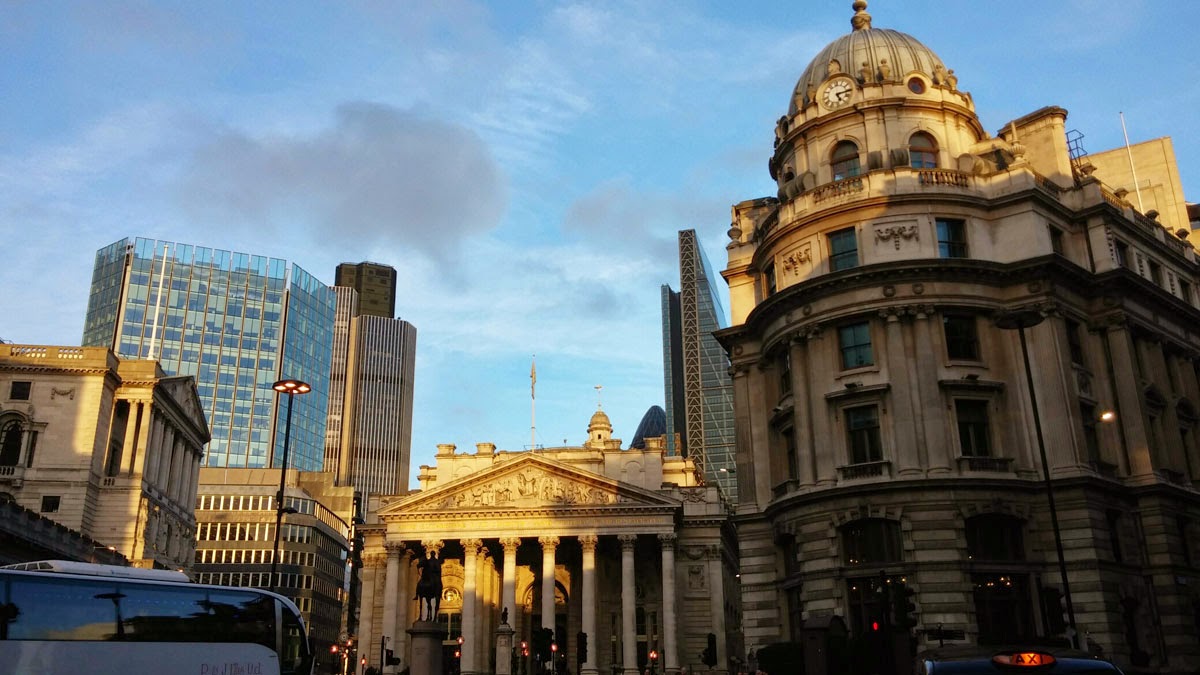 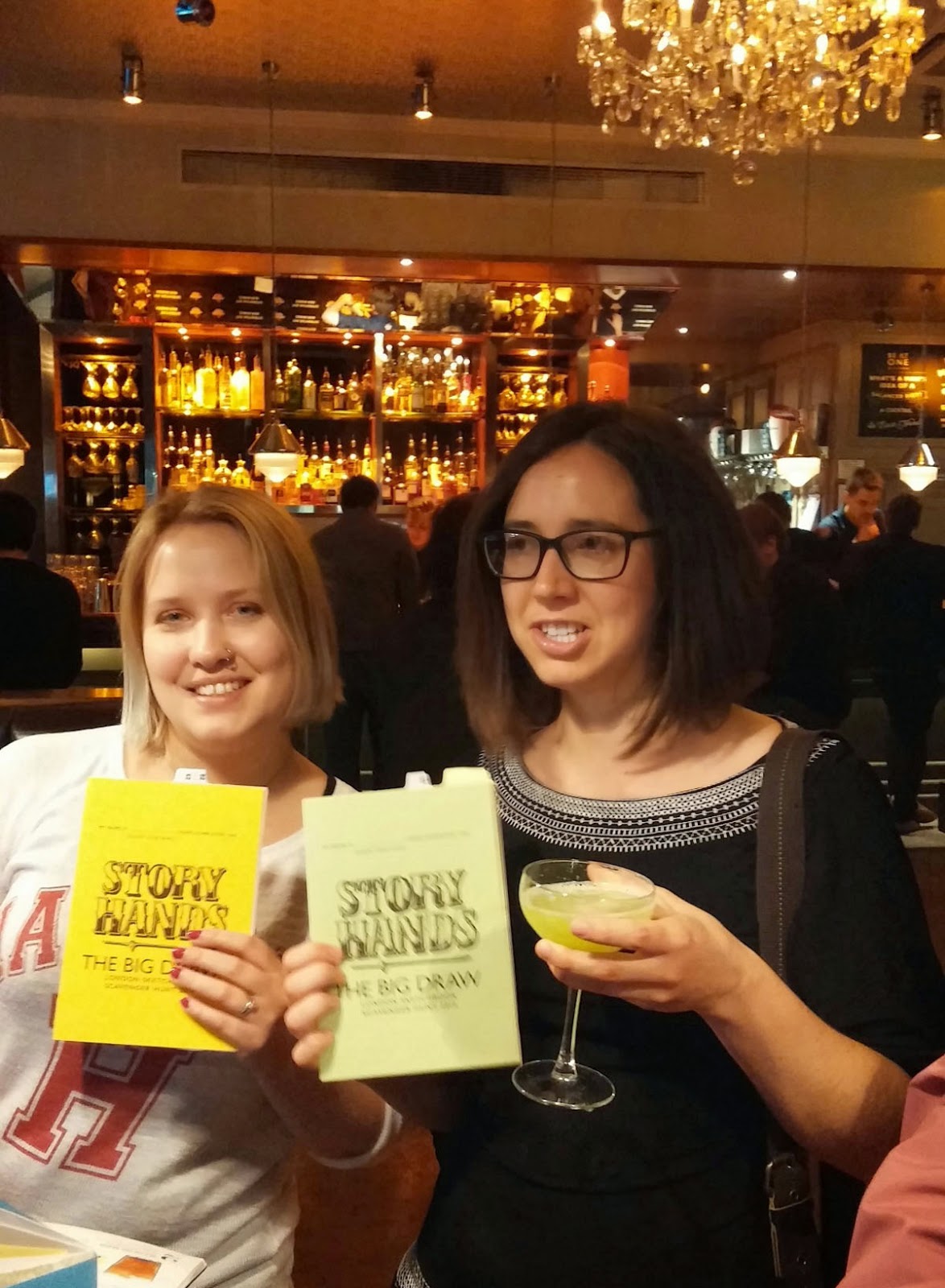 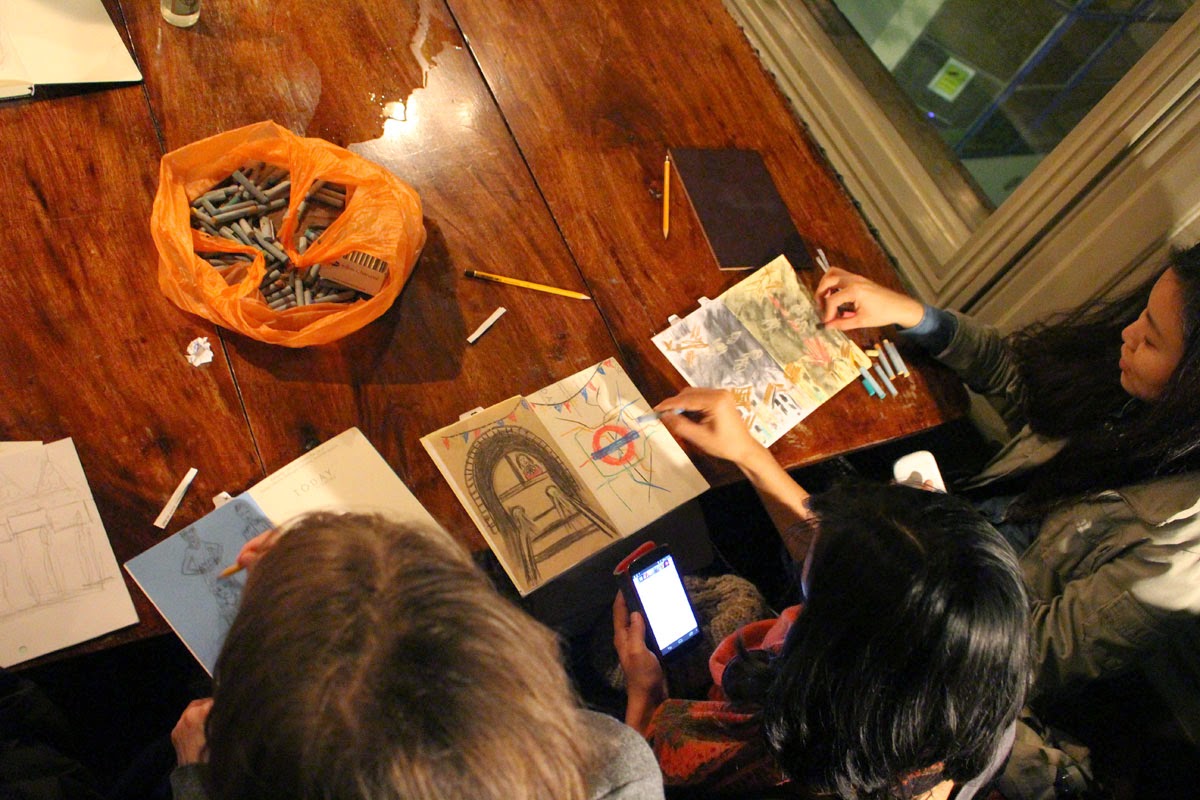 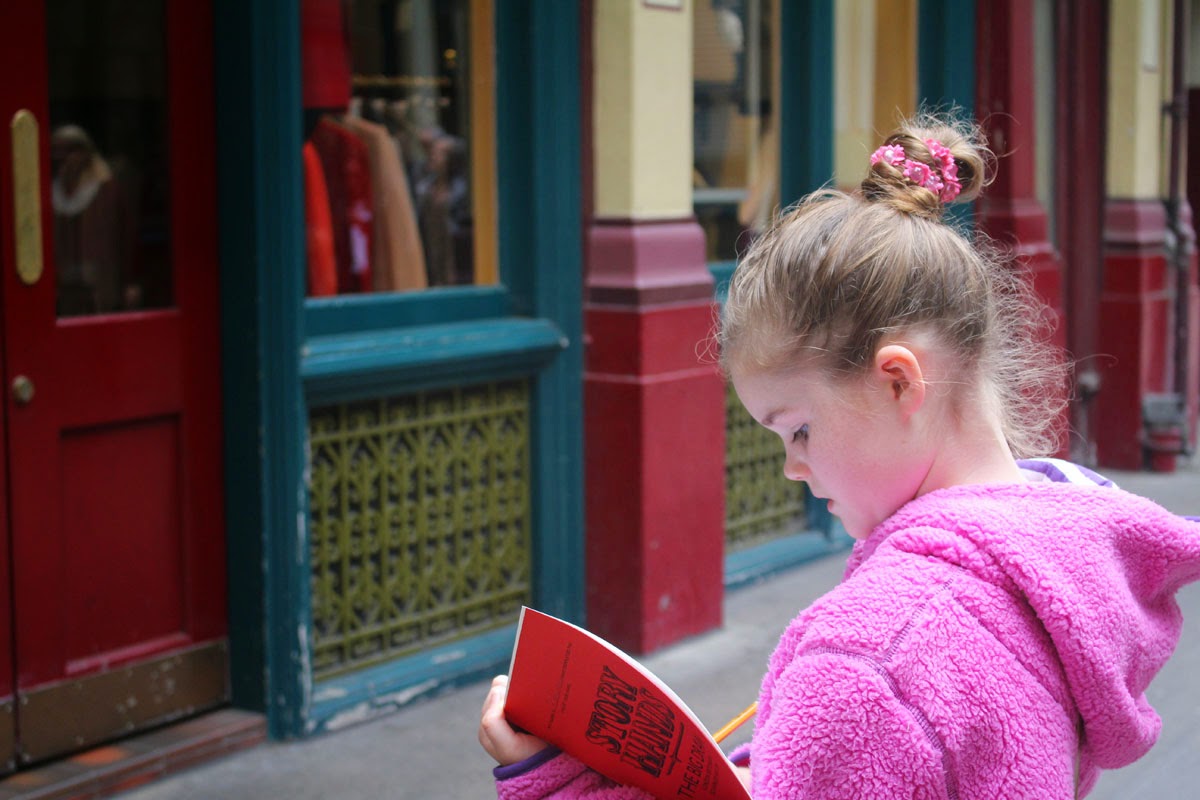 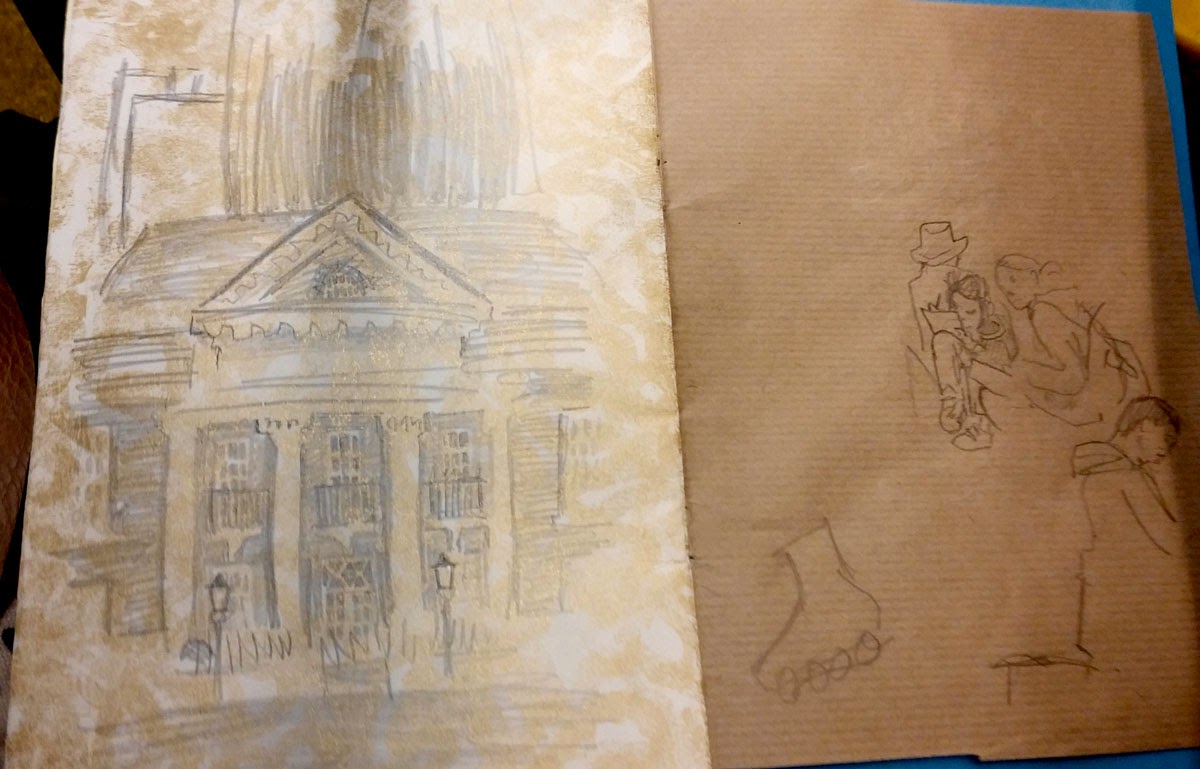 Hopefully 2015 will have as many adventures as 2014, keep your eyes open for my imminent website relaunch, and here's wishing you and yours all of the good things and success in your endeavours. 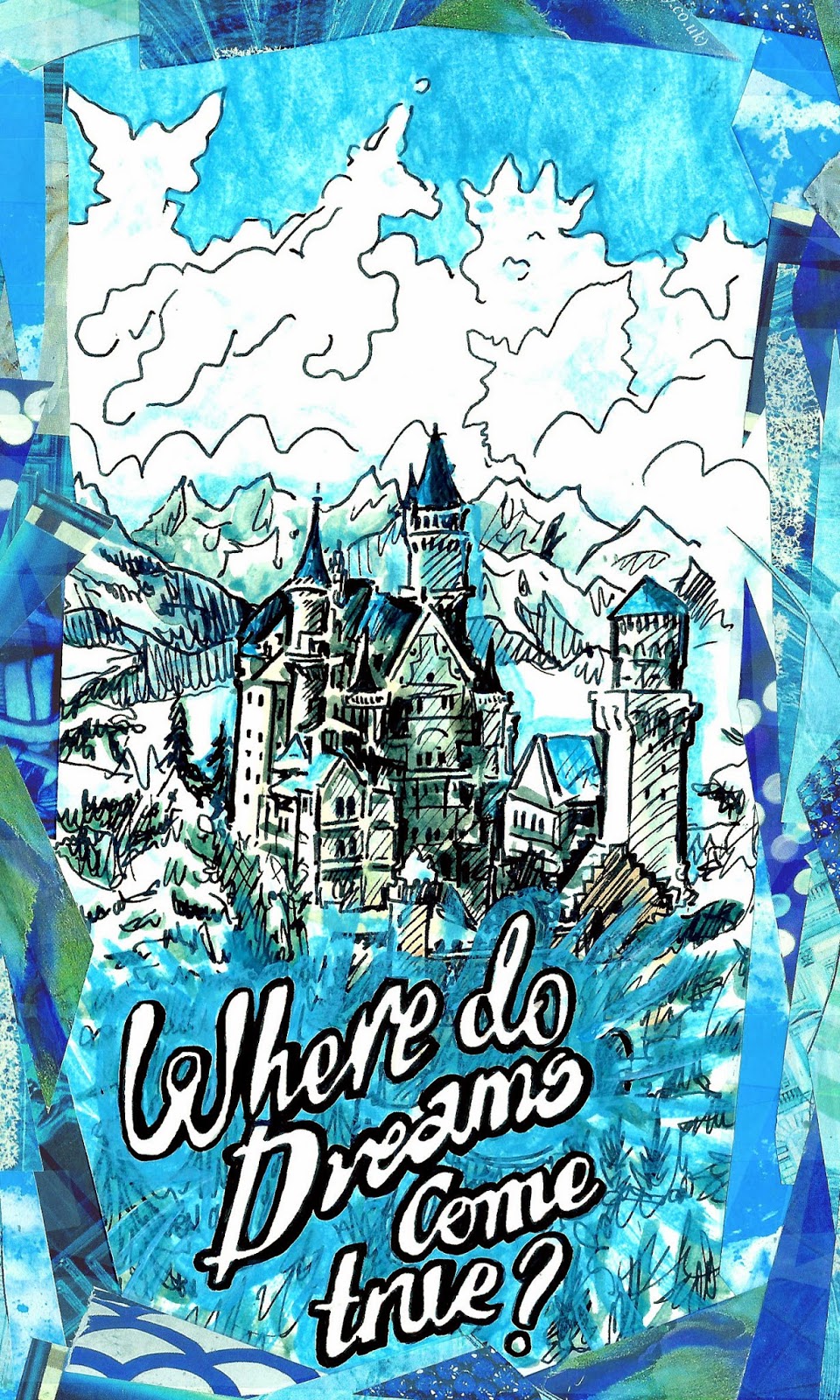 Posted by Jenny Robins at 12:34 PM No comments: