In praise of felt tips

Felt tips can get a bad press, Mostly because if you use them badly, they look, well, really bad.
But if you use oil paints badly....  yeah they look really bad too. und so weiter.

I don't know if the quote is a bad workman or a poor workman who famously blames his tools, a poor workman at least has more reason to own low quality tools I suppose.

And I could easily go on a sadly un-sponsored (but welcome to offers!) praise singing bent about the virtues of Promarkers, or Sharpies, or Kuretake Brushables. Or reminisce about this really amazing set of felt tips I bought in a french supermarket in my late teens (Ultra-lavable) which just bled perfectly on cartridge paper and blended so nicely. But I think that's only half the battle.

In fact sometimes rubbish felt pens can be even more satisfying, getting that scratchy half tone with a perfectly uniform colour? yum.

I've been using felt pens, and yes, specifically but not exclusively Promarkers and Sharpies, in a lot of my live drawing work recently, because they are quick and colourful. And for the tonal work (the shadows) too - yes for realsies, in fact I often like to start with the tones, and add details after (because even with posh pens, dark colours can sometimes bleed into lighter colours if you go over the top, and because as well, it makes people go oooooh). As can be seen in these pictures herenow. 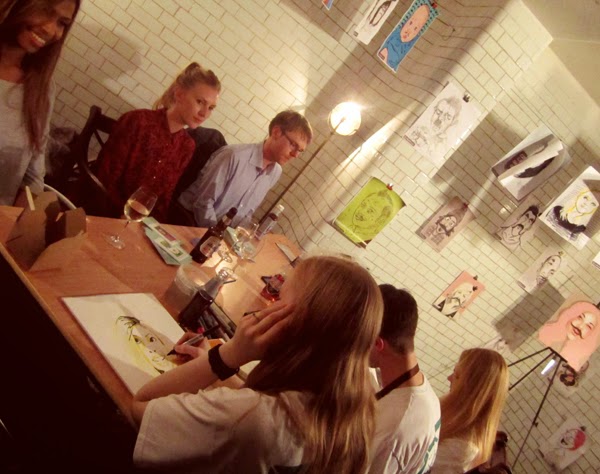 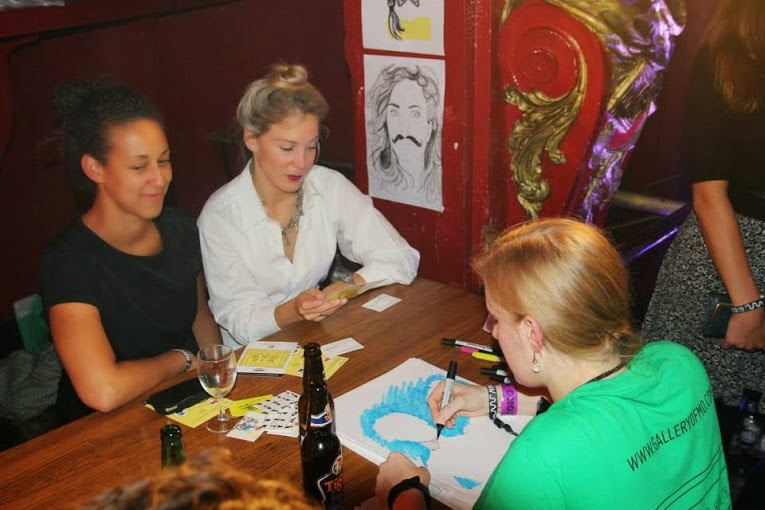 I just drew the brilliant Jen Conroy in this very style and thought to cunningly scan the process in three simple stages, so that you toooo, can ooooh. If you like. 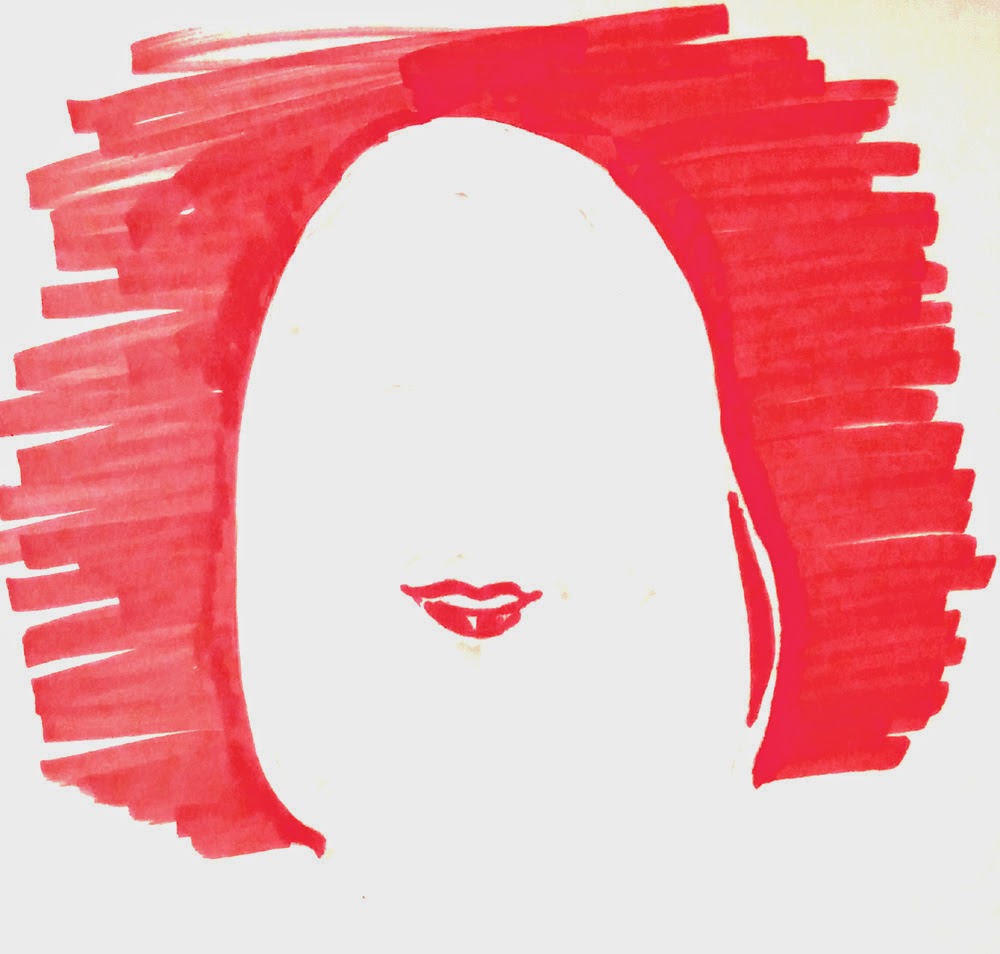 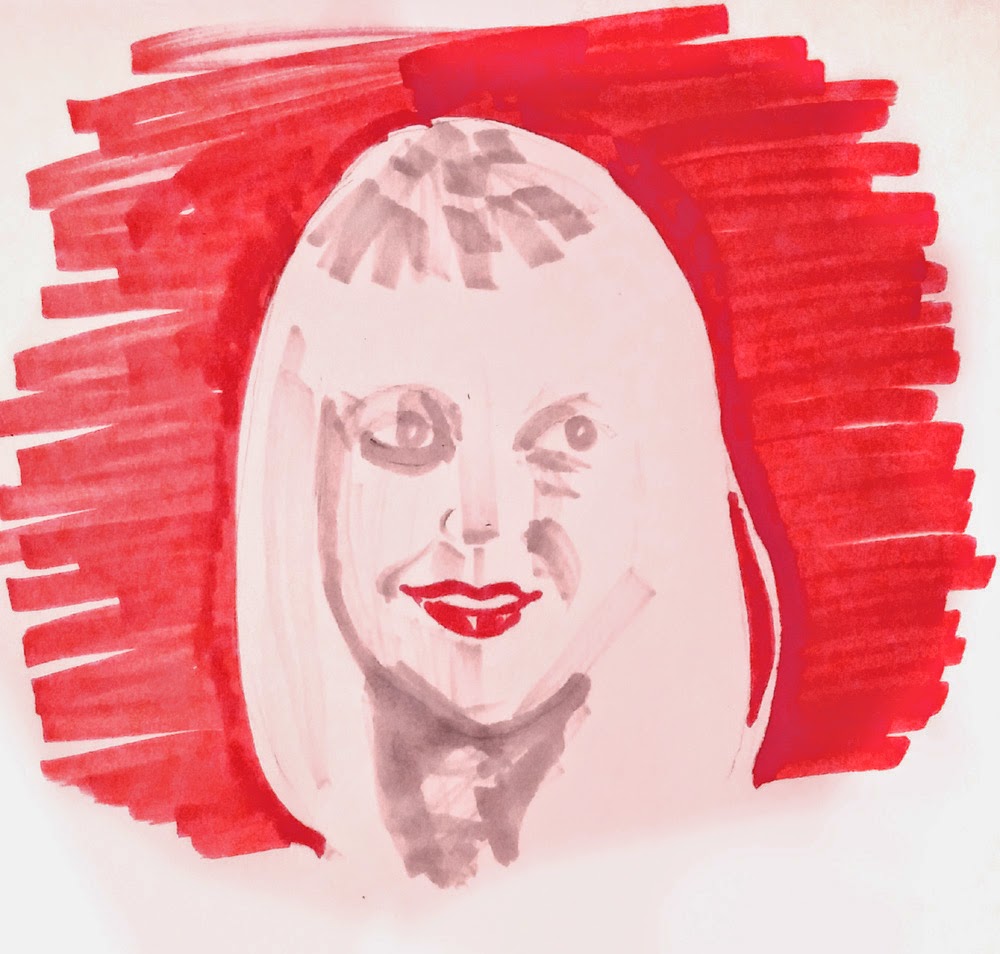 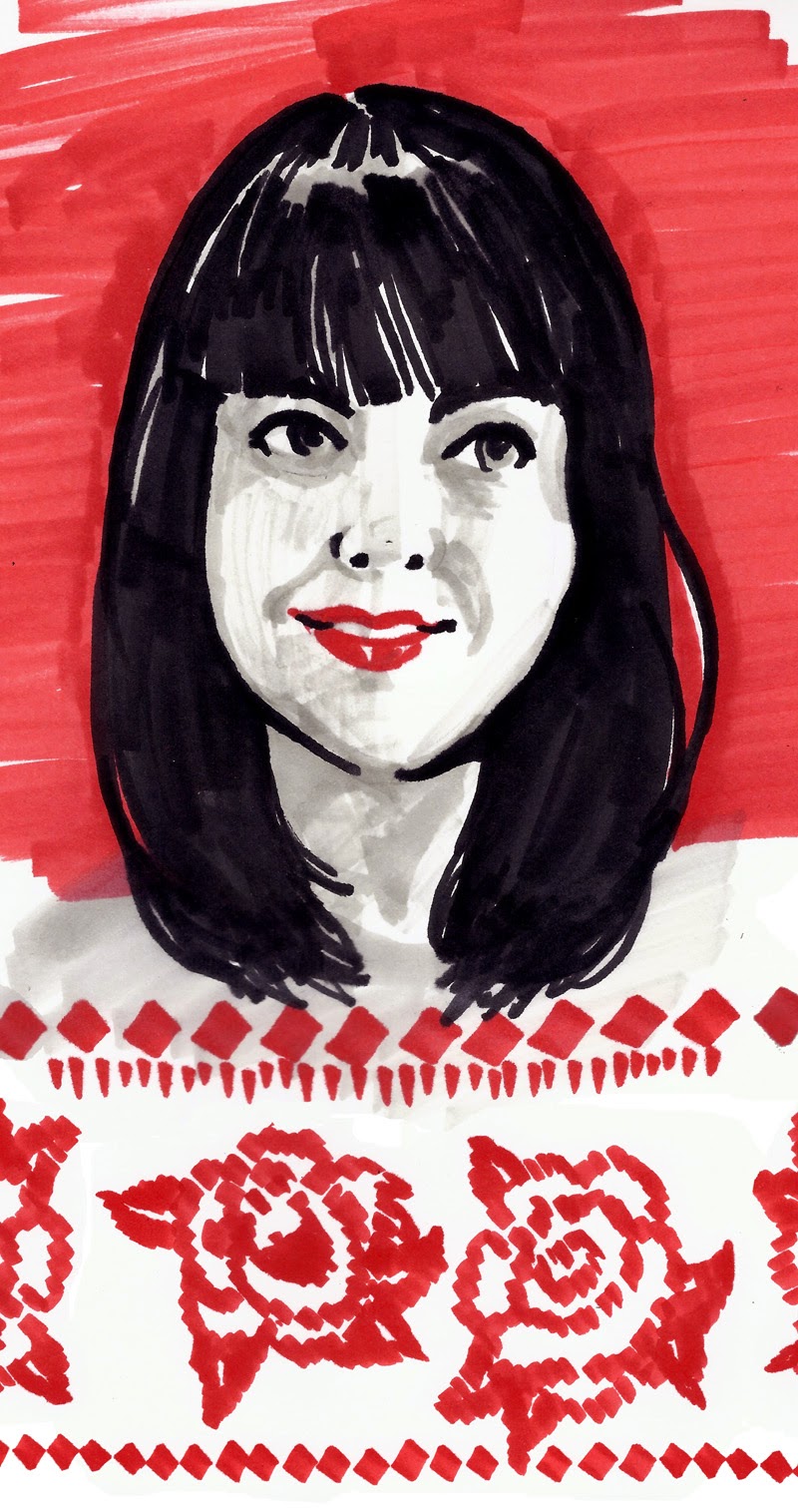 Detail, and some whimsical pattern.

Here are some portraits I did a few weeks ago at the Jumble and Pearls Christmas Fair. 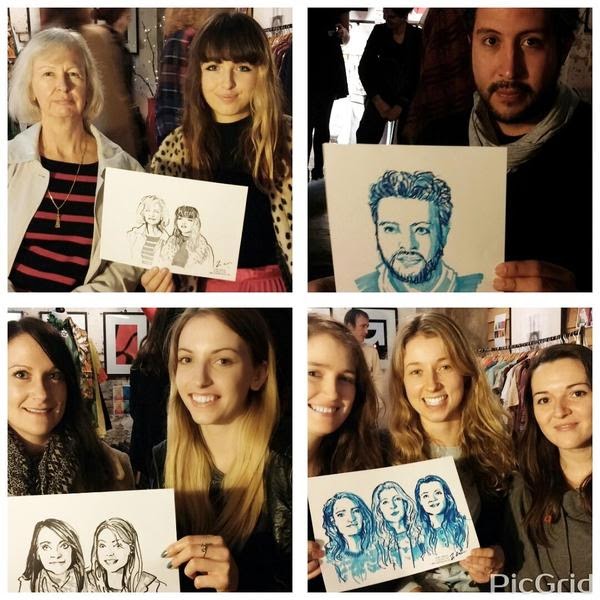 In the summer, I used felt pens for a few other more exciting live drawing instances, which I did not get around to blogging about at the time, due to excess of thesis.

In September I went to an OffLife quick draw event at The House of Illustration, a newish graphic arts gallery in that newly developed nice fountany bit at granary square across the canal from London St Pancras. Which I like to call London St Pancreas and pretend I'm a tourist.

We were given a theme to illustrate every 15 minutes, so we literally did have to draw quickly and think quickly too. I sat with the always excellent value Gareth Hopkins aka GrthInk, he did a blog of the event (in a much more timely fashion) here.

I like having to think on my feet, or perhaps with my fingers in this case, and I had a great night, although not all of the drawings I did are ones I'd necessarily want to show you. One I'm holding back because I want to do a properly worked up version for my portfolio when I get time. I left the original drawings taped to the wall, so apologies for the phone photo pictures 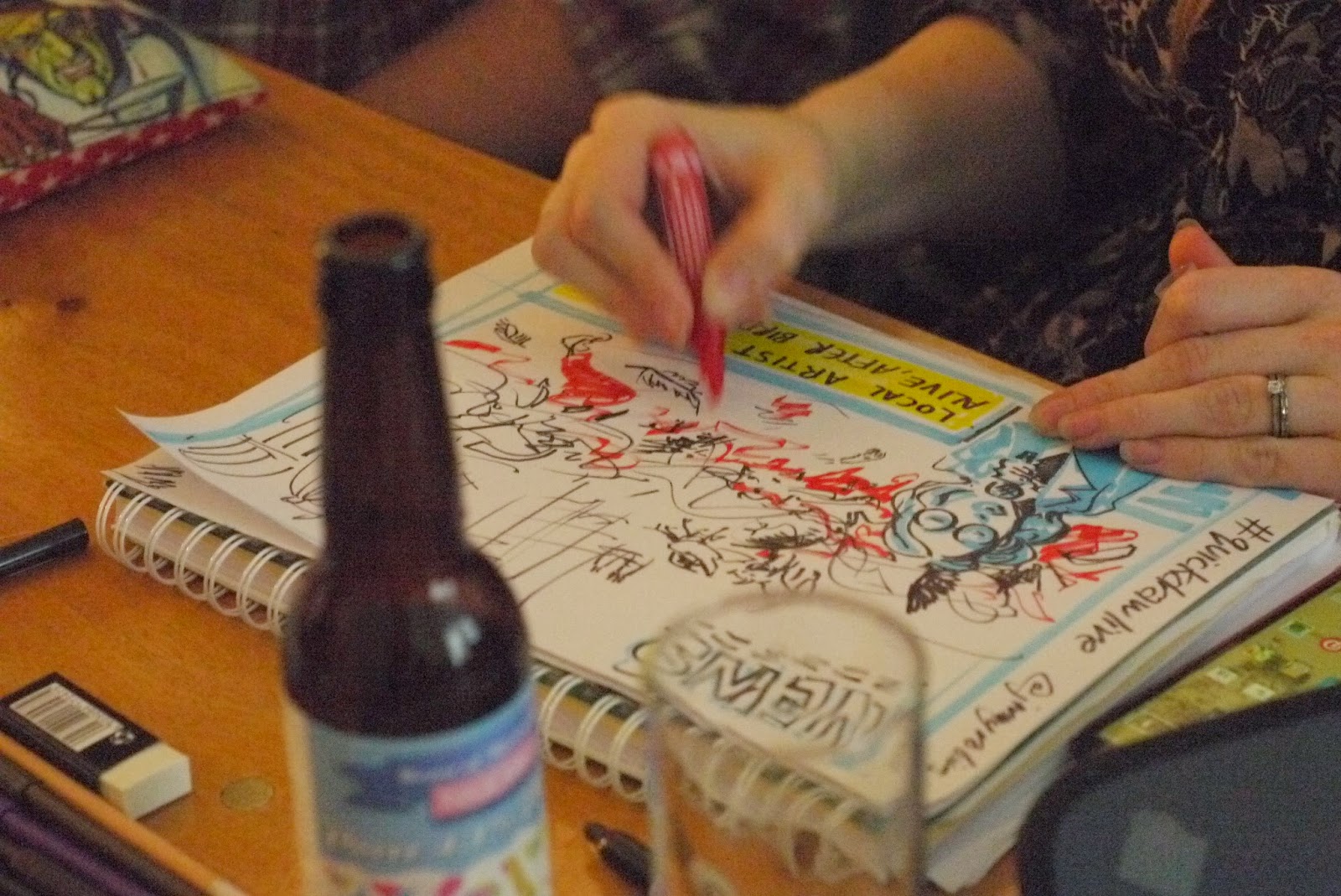 The first topic was 'How I'd get my five minutes of fame', I started straight in by drawing a newscaster standing in front of a TV frame, hopeful that by the time I'd drawn this I would have come up with a good idea. I didn't really come up with a good idea, but I'm happy with the image because of this early attention to framing and composition innit? 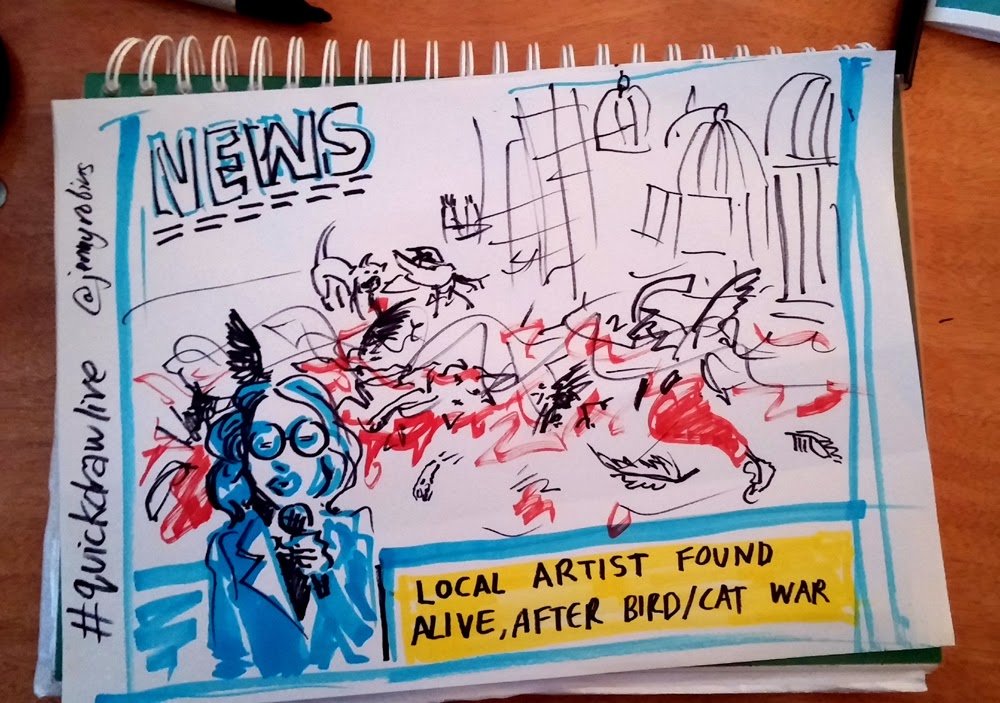 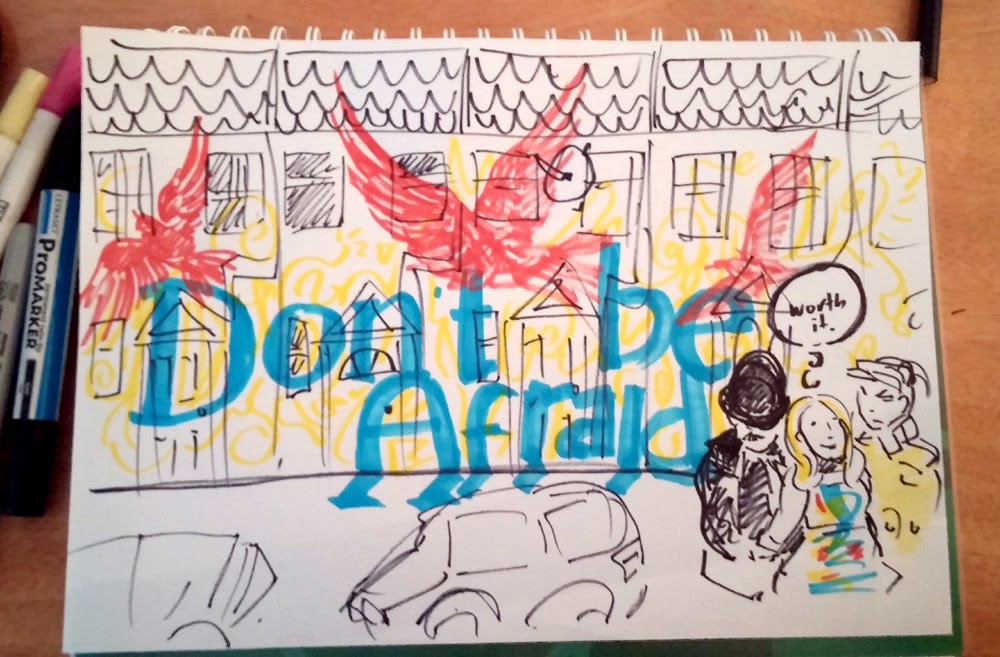 I've always wanted to become an epic street artist and commit nefarious acts of beauty, but I've never had the balls. This is also one of the many answers to the question what would i do if I had Bernard's Watch. But that's another story. 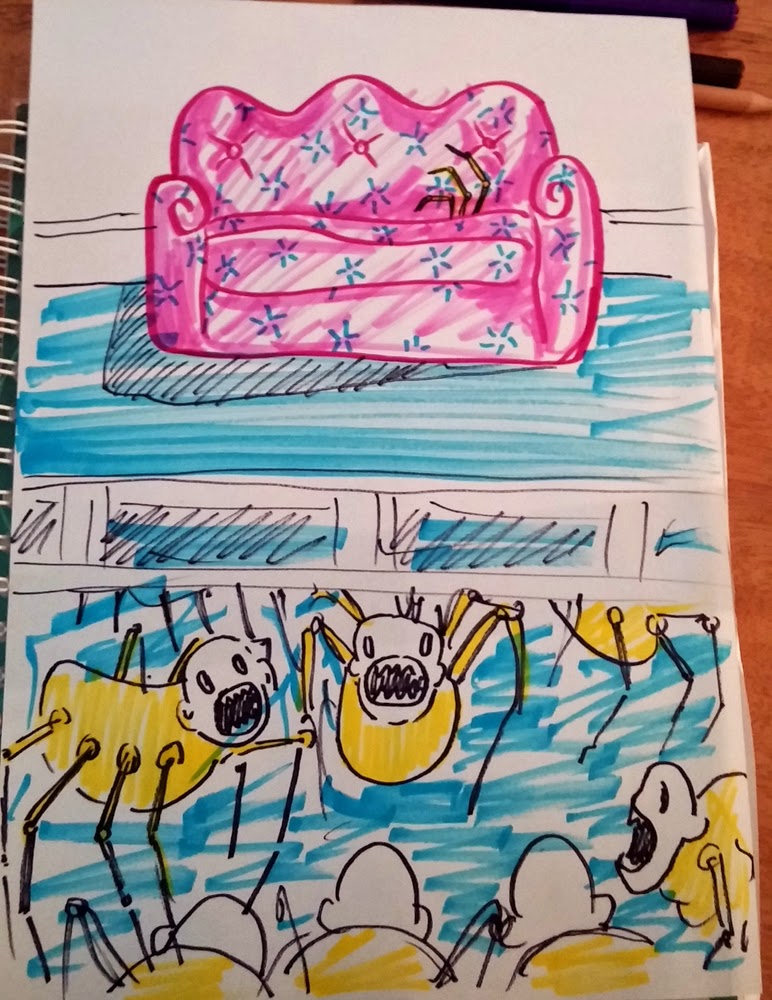 Off Life actually run an online Quick Draw every Thursday, if you're interested in getting involved with some speedy illustration.

Now on to the final felt tip adventure I want to chronicle. Way back in May I pitched a live art idea to an events manager I've worked with a few times doing live portraits with Cult Events, what I ended up doing was not exactly what I pitched (I'm keeping that one under wraps still, I'm going to make it happen sooner or later) but was possibly the most fun I've had with felt tips.

Over the course of an evening at Dive Bar beneath Hoxton Seven titled Peep Show, I filled two enormous boards with live sketches of the performers of the evening, amassing together to make one large record of the event.

Did I mention that a large number of these performers were burlesque and drag artists? 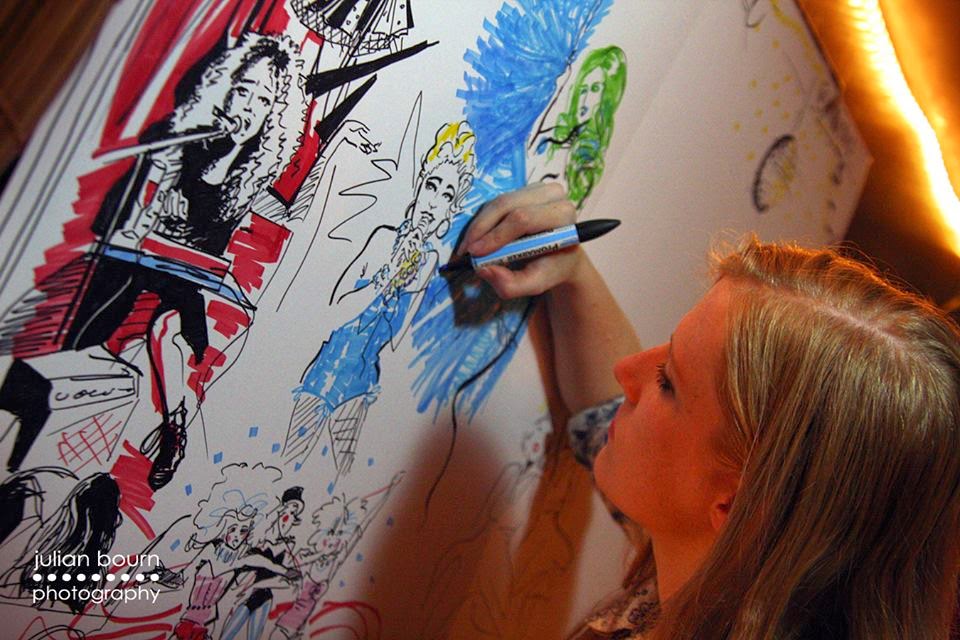 Similar to my cowardice in not so far becoming an internationally renowned street artist, is my persistent lack of dressing up in feathers and face paint and shaking my thing. The spirit is willing but the flesh is lazy. I adore anything OTT and sparkly and tongue in cheek, but realistically, I'm not going to be the one on stage singing about my sexploits. That would be inappropriate.
Because I am a teacher.
And afraid.

But I can DRAW them.
This is what I drew that night. 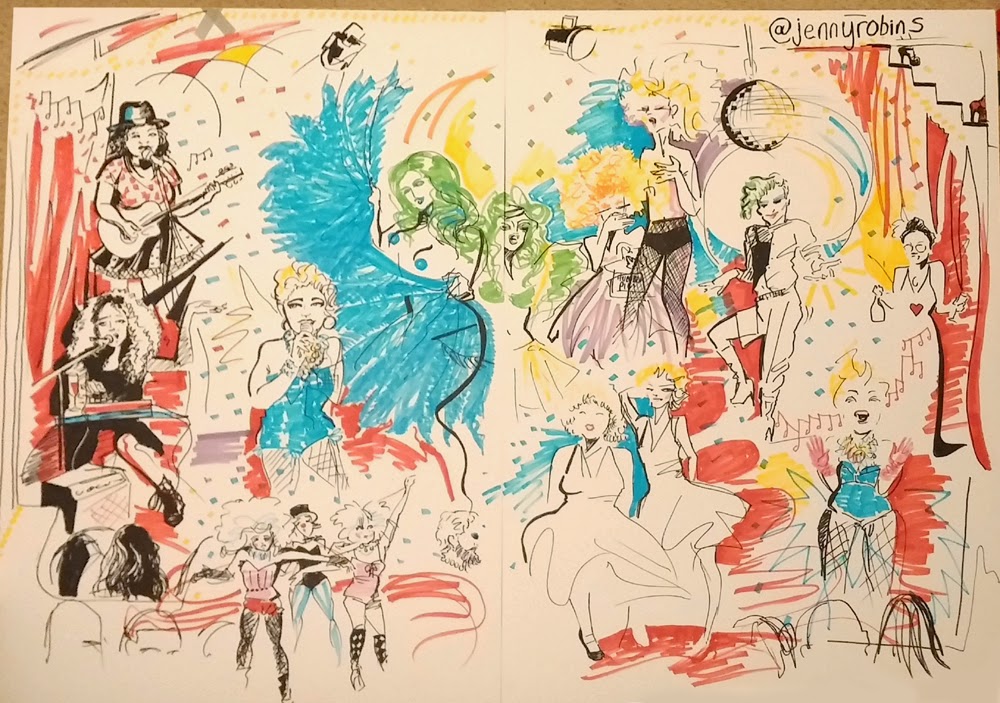 I started with the mirror ball, and added atmospheric light splashes with the square end of my Promarkers. 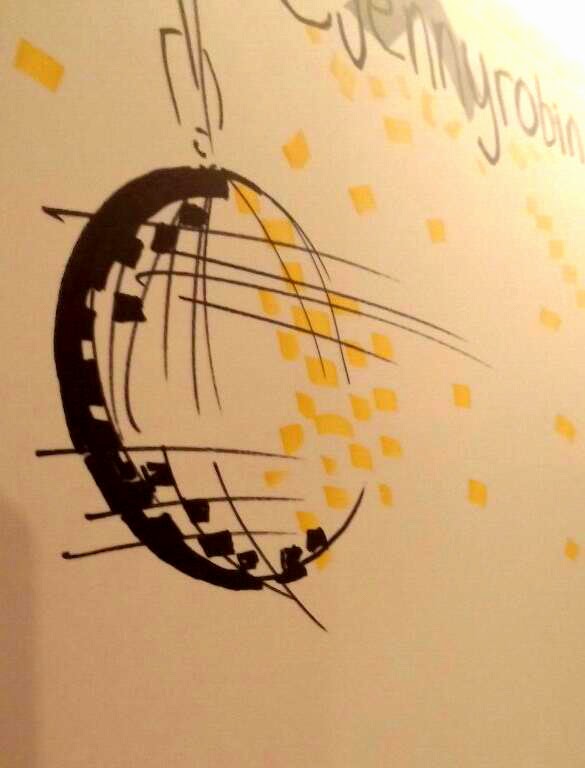 Of especial note was the mesmerising musical performance of Kristal Sisodia,
I almost captured her elegance. 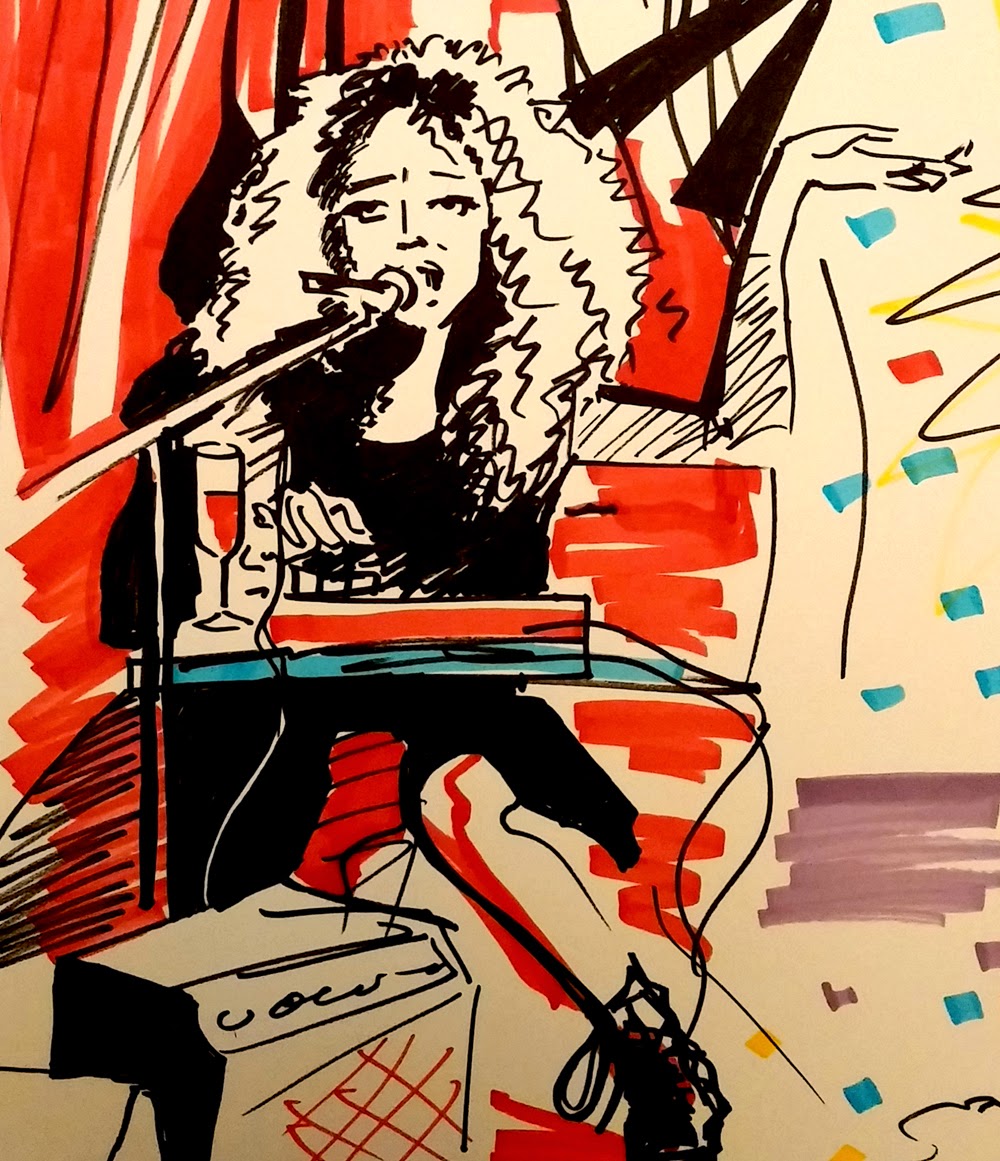 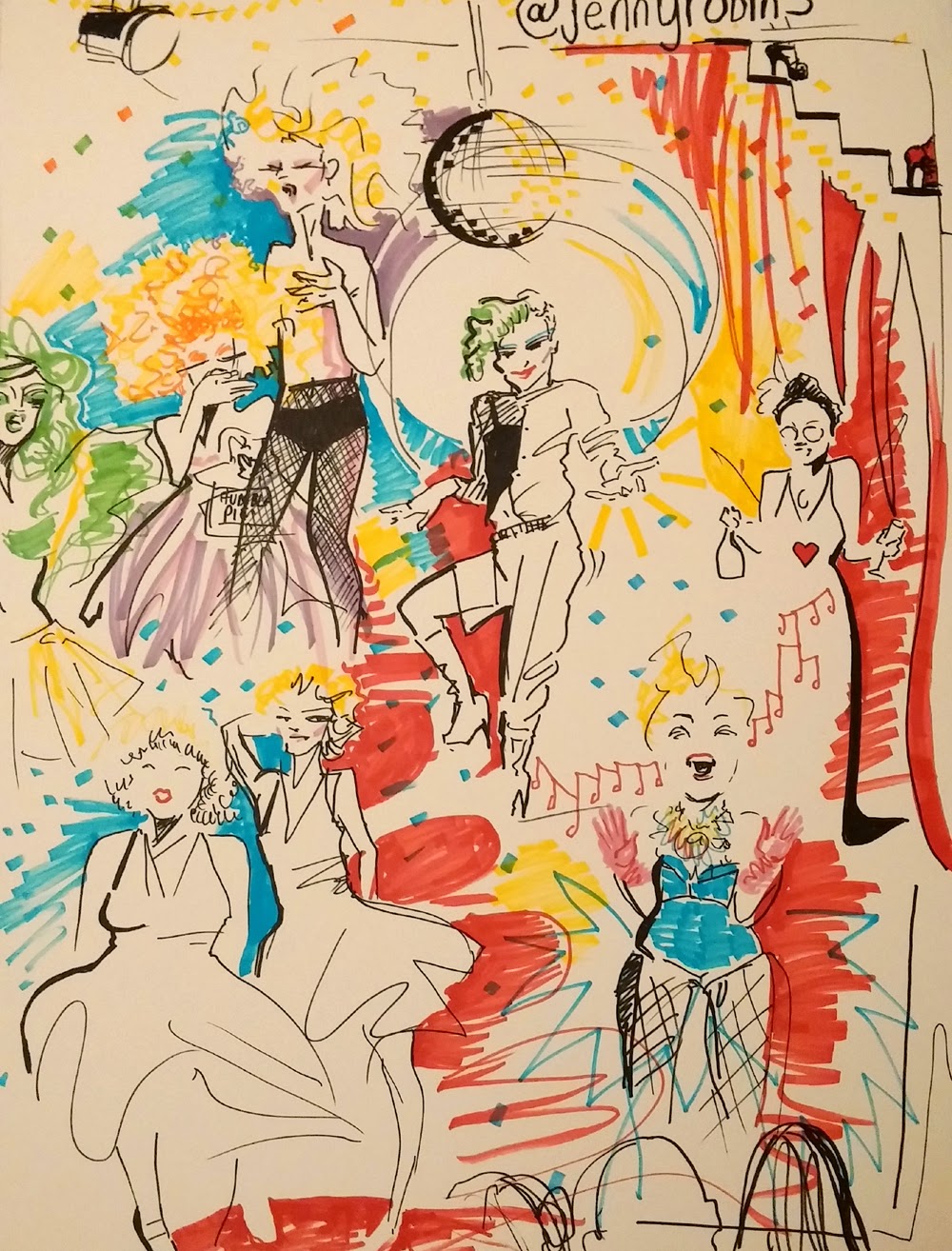 Also in evidence were several members of The Family Fierce, some of whom you may have seen on Drag Queens of London.

Including but not limited to the enigmatic and effervescent Mx Ruby Wednesday (centre, Jokeresque makeup), the compère par excitement Rubyyy Jones (singing and pink opera gloves, bottom left) and I'm pretty sure (should probably have made notes) that the figure top left is the ineffable art queen Bourgeoisie.

I also enjoyed meeting Fairyprincessmermaidbarbie  although I didn't get to draw a detailed picture you can see her here in profile. 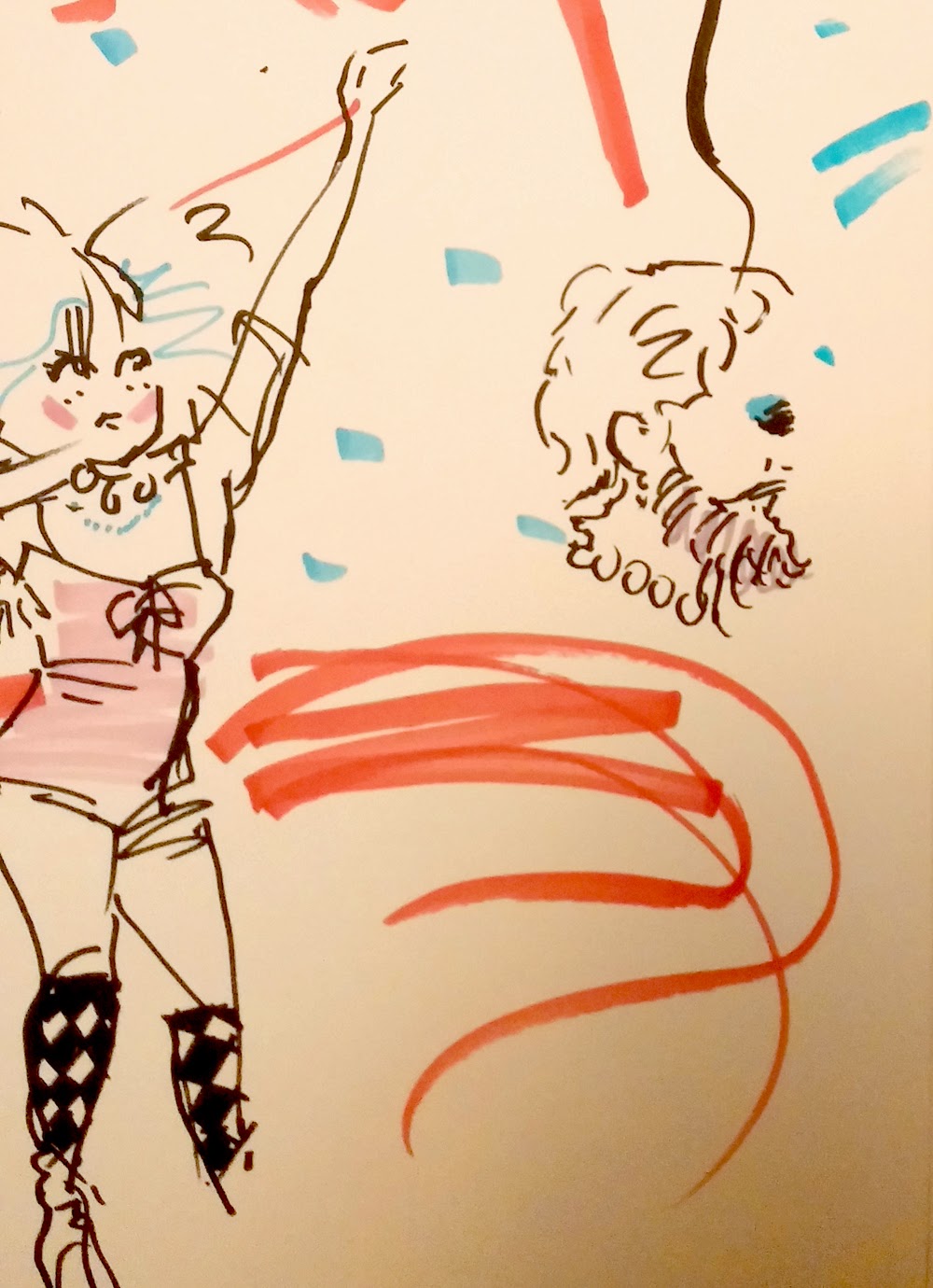 Have I convinced you that felt tips are brilliant yet? Or perhaps of your future career as a drag artist?

If not me, then why not someone else, here are some other awesome artists I like using felt tips. 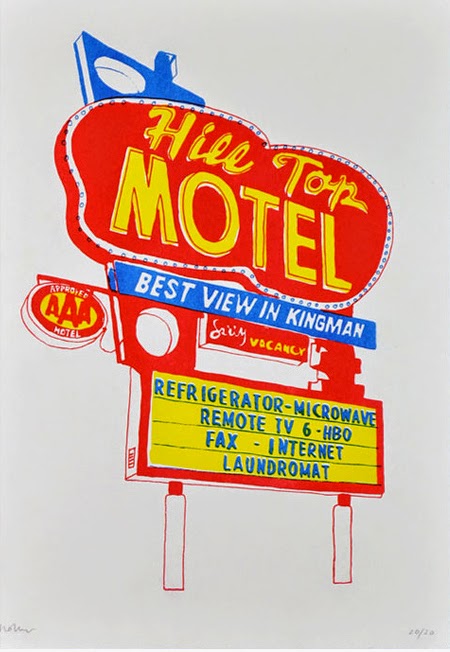 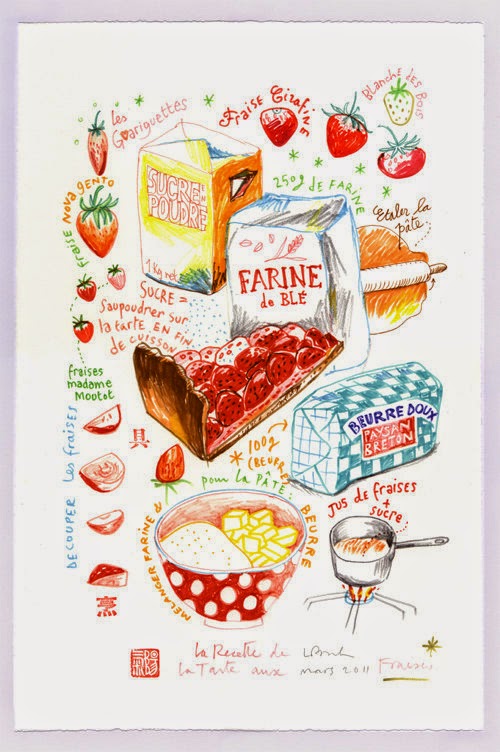 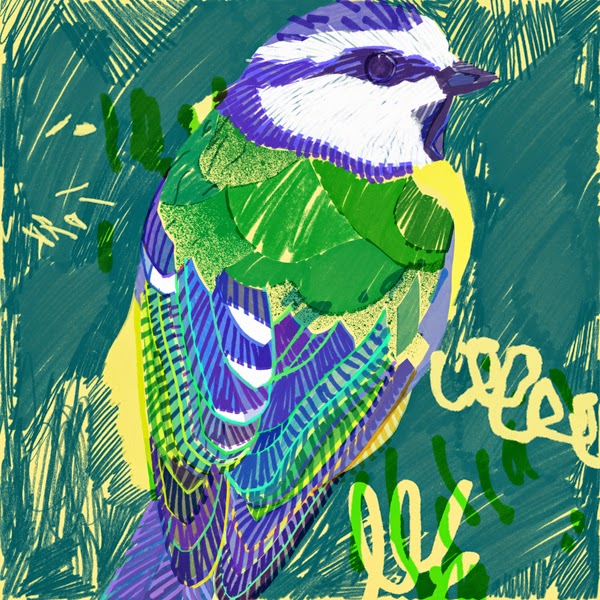 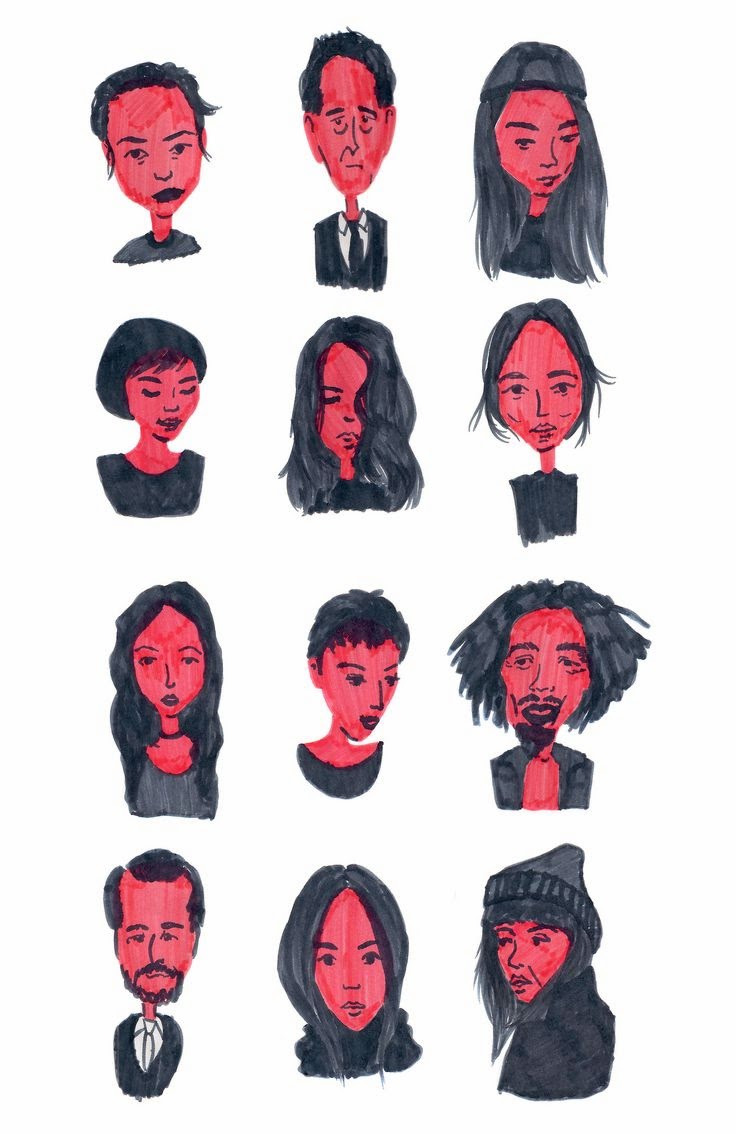 Ahh the wonders of felt tippery. Next week: why I really like filing cabinets.

I mean. I do really like filing cabinets. I just might not blog about it.
Posted by Jenny Robins at 10:22 PM No comments: