Eight for a wish, nine for a kiss, why drawing birds is like drawing people.

Summer is basically over guys.

Before I go back to schooltimes this week, I wanted to share with you some birds and words and drawings. Some organic work feeding into work sort of stuff. In case you think I only draw comics and cookie cutters these days.

In the beginnings of the summer I did quite a few bird pieces some of which are still available on Artfinder and I took quite a lot of in progress pictures.

I had a magpies commission to do and it was a while since I had drawn any, so I did a practice piece of a magpie taking off to the left, which was a lot of fun. Tapping into this territory of planning combined with quick, fluid working is so good - each individual stage is quite loose and quick, but you have to wait for each one to dry so that the ink doesn't just bleed into the lighter areas completely out of control. Like watercolour, using ink is a lot about patience and a lot about balancing chance and control. 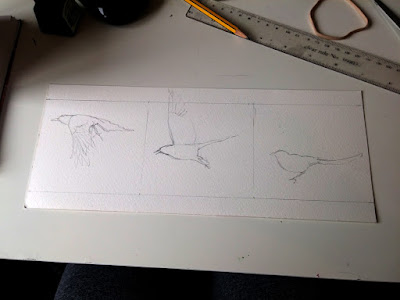 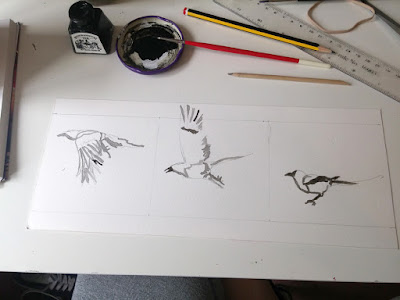 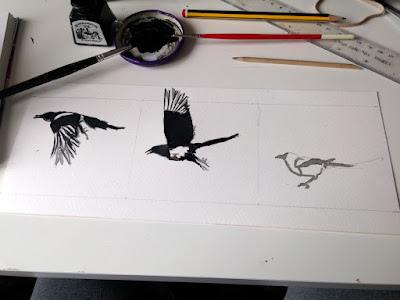 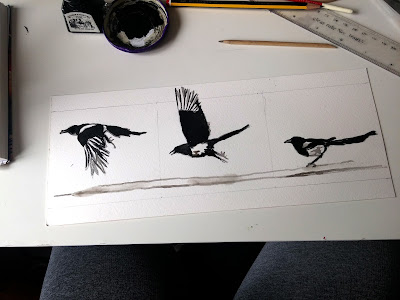 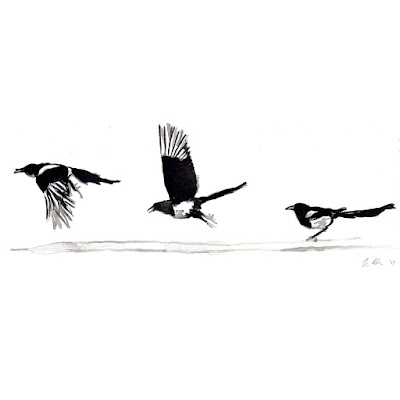 So then I did some more magpies pieces 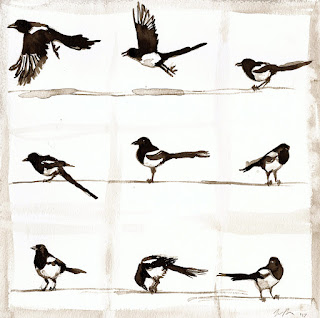 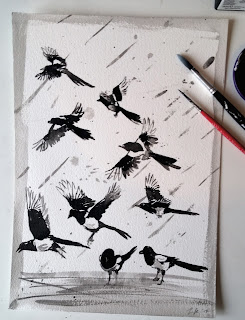 Also I drew some hypno barn owls. Because. 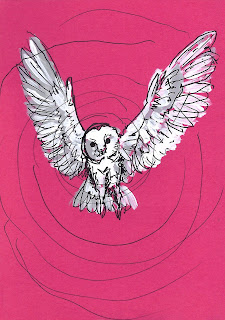 And then, because I had some photos of a swan that I took on a walk along the Regent's Canal, I did this swan piece which is still for sale. 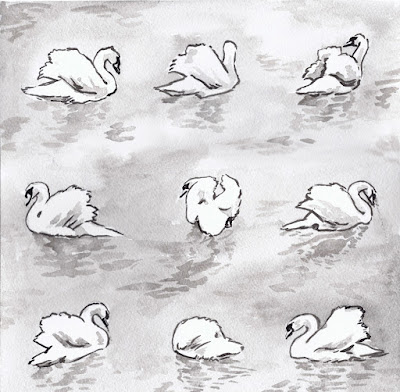 One thing about drawing birds in sequence like this, (as well as the satisfyingly obtuse combination of regularity and irregularity that reminds us that though we live in a world of mass reproduction there is still infinite variety - yes I am good at arty bullsh*t thank you) is you can include some of the angles/poses of bird that don't really look like what the brain reads as a bird.

Confused? Let me explain. Drawing birds is a lot like drawing portraits. Because 90% of the time, the position a bird is in and the angle you can see it from, don't fit our mental template of bird. The mental template requires either a bird standing still on a branch/wire/post or swimming, with it's head up and in profile so you can see the beak, or a bird in flight with the wings flexed and visible.

This on it's own, would never be read as a swan 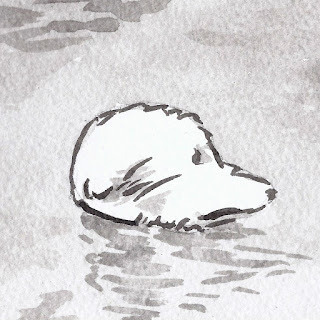 I mean what is that?
Some fluff? A carelessly ejected dollop of whipped cream? A shaggy baseball cap?

But in context with their 8 swans a swimming siblings, we can read it as a swan.

How is that like drawing portraits? Because despite living in the real world and looking at real people all the time, we still are slaves to photo and mirror faces when it comes to considering what those people actually look like. 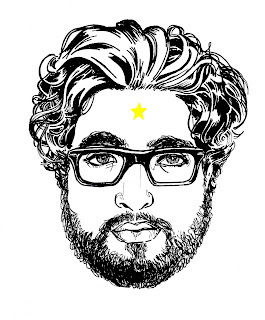 When I teach portraiture I always make sure to emphasise how hard it is to break down our mental conditioning to read a face as a symbol. One of your very first jobs when you are born is to identify fellow humans, to find your tribe you are basically looking for a coordination of eyes and a mouth because that's about as far as your visual processing goes. Which is why we love emojis so much.

I mean probably, I'm not a scientician. But this makes people who are bad at drawing faces feel better.

Training yourself to process the visual information of the eyes being half way down the head not up at the top is the first step to de-emojifying your brain. You can do that drawing on the right side of the brain thing and make yourself forget it's a face you're drawing and just look at the shapes. Which is fine if you're drawing from a photo. But problematic if you're drawing a person in real life who moves a bit whatever their intentions. 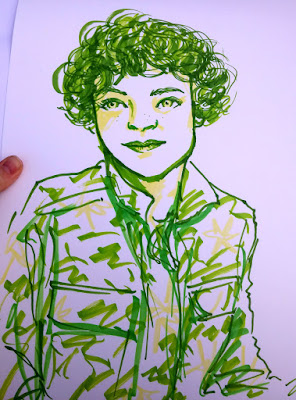 I actually prefer to draw people from real life because of this.

The infinite tiny movements your face makes give a wealth more information than any photo could, and so many of us are in the habit of putting on that practised smile as soon as a camera points out way. A smile that's usually nothing like the smile we give when we're genuinely amused, or contented. Not like the bird posed on a wire or wings out and up for a fraction of a second. To capture a real likeness you have to see both - the photo face and the face behind it. The person behind it.

That's what I think anyway. I do also LOVE drawing faces straight from a photograph. It's not that I don't like that. With the facebook project I mostly have the advantage that I know the person in question in real life, so I can tell which of their facebook photos are good representations of their real life presence, and which are the ones that were chosen as a profile pic because they look more like what we wished we looked like. If I'm doing a portrait for a client I always ask if they can send me multiple photos as well as the one they want me to use as primary reference. So I can check the angle of the features as an average, and make sure I talk to the hind brain of the people that know the real life person I'm drawing.

With this little guy for example, I had to make sure I got his sleepy eyes and his chubby little neck. 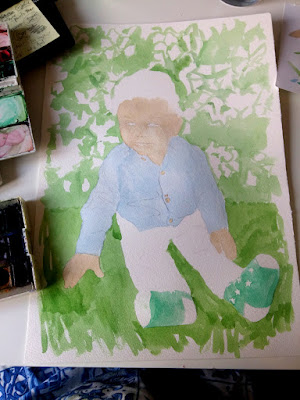 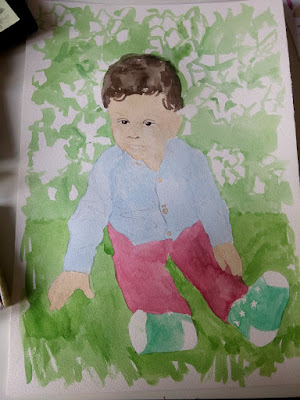 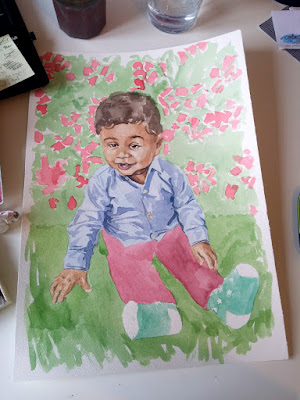 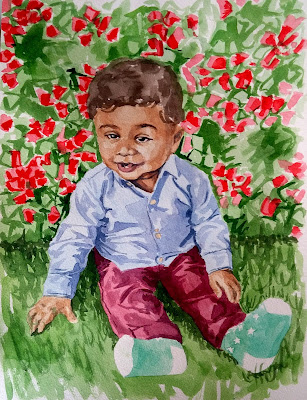 Another recent commission for an editorial illustration in UCL Alumni magazine had me drawing a small brown child, but this time with lots of colourful reflecting water. It was for an article about how over protected today's children are. 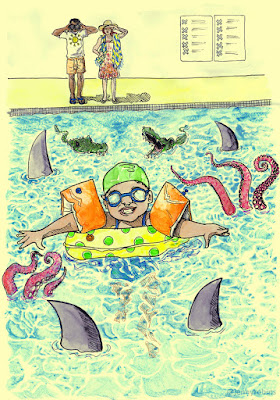 One of the joys of art is such that what one draws/makes, one often wants to draw/make more of. Which is why life feeds into practice and practice evolves. So this commission in a way lead to the look of the swan piece, and to me choosing this photo to draw of Julita from her facebook albums. 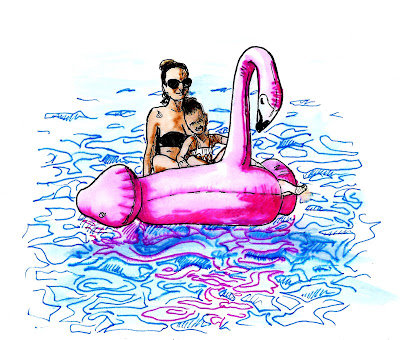 I think I've got reflecty water out of my system now.
But we'll see.

Maybe I'll think of a way to get some into the comic.
In black and white too, what a delicious challenge.

Posted by Jenny Robins at 12:24 PM No comments: